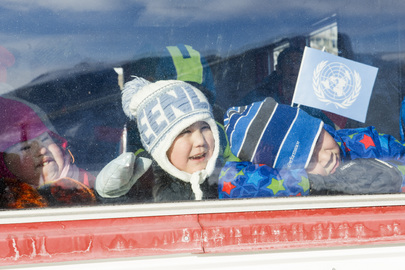 Numerous obstacles to education. Indigenous children are more likely to arrive at school hungry, ill and tired; they are often bullied, and the use of corporal punishment is still widespread. Ethnic and cultural discrimination at schools are major obstacles to equal access to education, causing poor performance and higher dropout rates. Indigenous girls, in particular, experience difficult problems related to unfriendly school environments, gender discrimination, schoolbased violence and sometimes sexual abuse, all of which contribute to high dropout rates.

Loss of identity, caught in no man’s land. When indigenous school children are introduced only to the national discourse at the expense of their native discourse, they are in danger of losing part of their identity, their connection with their parents and predecessors and, ultimately, of being caught in a no man’s land whereby they lose an important aspect of their identity while not fully becoming a part of the dominant national society.

Invisible and at risk. When a child’s birth goes unregistered, that child is less likely to enjoy his or her rights and to benefit from the protection accorded by the state in which he or she was born. Furthermore, the unregistered child may go unnoticed when his or her rights are violated. Later in life, he or she will be unable to vote or stand for election. These children are also at risk of falling victim to child trafficking and are often easy prey for those who exploit their vulnerability, recruiting them as street beggars, domestic servants in slave-like arrangements, or as child soldiers.

Education often irrelevant. Indigenous students frequently find that the education they are offered by the state promotes individualism and a competitive atmosphere, rather than communal ways of life and cooperation. They are not taught relevant survival and work skills suitable for indigenous economies, and they often return to their communities with a formal education that is irrelevant or unsuitable for their needs. They are forced to seek employment in the national economy, leading to a vicious cycle of social fragmentation, brain drain and a lack of development, especially because the jobs and salaries available to them often will not match their educational achievements.

Despite efforts, no solution in foreseeable future. Even in countries where the general level of schooling among indigenous peoples has increased, for instance in several Latin American countries and Canada, the quality gap in schooling persists, resulting in poor education outcomes for indigenous peoples. The conditions of extreme poverty, exclusion and isolation do not bode well for sustainable and multicultural indigenous education programmes.

In 2018, the United Nations Educational, Scientific and Cultural Organization (UNESCO) developed, in cooperation with indigenous peoples, Member States, the Permanent Forum on Indigenous Issues, the Special Rapporteur on the Rights of Indigenous Peoples and a range of different stakeholders, an action plan for the 2019 International Year of Indigenous Languages.