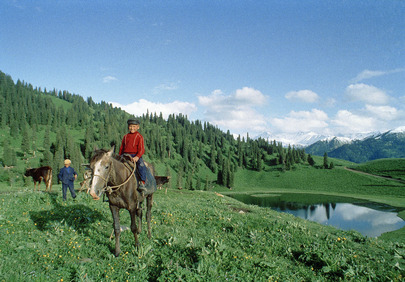 Land rights in law, but not in reality. Only a few countries recognize indigenous peoples’ land rights, but even in those countries, land titling and demarcation procedures have often not been completed, suffer delays or are shelved because of changes in political leadership and policies. Even where indigenous peoples have legal title deeds to their lands, these lands are often leased out by the state as mining or logging concessions without consultation of indigenous peoples, let alone their free and prior informed consent. The lack of legal security of tenure remains a crucial issue for indigenous peoples almost everywhere.

New technologies force resettlement. The promotion of new technologies such as improved seeds, chemical fertilizers and pesticides, the introduction of cash-crop cultivation and large plantation schemes have caused environmental degradation and destroyed self-sustaining eco-systems, affecting many indigenous communities to the point of forcing them to resettle elsewhere.

The cost of unsustainable development. Large dams and mining activities have caused forced displacement of thousands of indigenous persons and families without adequate compensations in many countries. Several communities have been moved out of national parks against their will, while tourist development in some countries has resulted in the displacement of indigenous people and their increasing poverty. When indigenous peoples have reacted and tried to assert their rights, in most instances they have suffered physical abuse, imprisonment, torture and even death.

The Implementation Gap: Much talk, little action. While indigenous peoples have, since 2002, experienced increased recognition of their environmental rights at the international level, translating this political recognition into concrete advances at the national and local levels remains a major challenge. Many decisions made at the international level are not always respected or implemented at the national level, and indigenous peoples’ voices are all too often marginalized, if heard at all.

Severe impact on women. Forced evictions and the dispossession of lands have particularly severe impacts on indigenous women, who, as a result, often have an increased workload as they must walk long distances to find alternative sources of water or fuel wood, or are driven out of income-earning productive activities and into a situation of economic dependence on men.

The rights to lands, territories and resources are at the heart of indigenous peoples’ struggles around the world. Indigenous peoples’ relationships to ancestral lands are the source of cultural, spiritual and social identity, and form the basis of their traditional knowledge systems. There is an urgent need to advance these rights to improve indigenous peoples’ well-being but also to address some of the most pressing global challenges, including climate change and environmental degradation. Advancing collective rights to lands, territories and resources is also an effective way to protect critical ecosystems, waterways and biological diversity.

Conversely, in countries where collective rights have been recognized, they are often not fully implemented, or procedures for their implementation (land or resource mapping, demarcation and titling) are not completed or suffer significant delays. The lack of enforcement of laws, as well as contradictory laws and regulations, frequently results in the de facto denial of the rights of indigenous peoples.

Conservation programmes—based on the concept of excluding human beings from the environment and natural resources (i.e. forced evictions and other harms)—have negative consequences on the rights of indigenous peoples and fail to recognize their natural custodianship of the environment and ecosystems. As such, there is an urgent need for dialogue between States and indigenous peoples to reach binding agreements that will acknowledge the legitimate interests of wildlife conservation but also recognize and guarantee communities’ rights under the United Nations Declaration on the Rights of Indigenous peoples.

Achieving the Sustainable Development Goals is not possible without fulfilling indigenous peoples’ rights to lands, territories and resources. Thus, States should include the recognition of customary rights or tenure rights of indigenous peoples to their lands and resources under target 2.3, which calls for secure and equal access to land.

There is great concern for indigenous peoples that are victims of violations of their rights to lands, territories and resources. Multiple threats and obstacles hinder their social, economic, political and legal development, including discrimination and marginalization; lack of rights to land and natural and productive resources; denial and lack of access to justice; violations of cultural rights; denial of the rights to legal recognition, political representation and participation; lack of access to basic social services; denial of the right to existence and self-development; violence against indigenous individuals and communities, including rape of indigenous women; and multiple-impact land conflicts arising from development and conservation projects that fail to take into account the rights and interests of indigenous peoples.

There is ongoing discussion on the need give special consideration to indigenous peoples’ experience with autonomy and constructive arrangements in their expression of self- determination, including through a compilation and dissemination of good practices.

Indigenous peoples continue to express their concern at States that grant concessions for extractive industries, infrastructure projects, large-scale agriculture or hydroelectric dams without their free, prior and informed consent. This situation has led to inevitable social, economic and cultural conflicts between governments and indigenous peoples.

There is a need to strengthen and further the application of community-based mapping, monitoring and information systems (CBMIS) as complementary evidence base for assessment and monitoring of the 2030 Sustainable Development Agenda, the Paris Climate Agreement and the post-2020 Biodiversity Framework, and for use as tools for community governance and self-determined development.

Climate change, deforestation, pollution, development and loss of diversity are serious threats to indigenous peoples due to their dependence on the environment and the resources of the lands and territories. It causes the loss of traditional knowledge, disintegrating traditional governance structures and their cultures. This policy briefing provides examples of the holistic perspective of indigenous peoples on resource governance, land rights, mitigation of climate change impact on their environment and resilience-building through the use of their traditional knowledge. It also highlights the benefit of indigenous peoples’ full participation, in particular, indigenous women in decision-making processes to prevent conflict. It notes the importance of upholding the rights of indigenous peoples as enshrined in international law and full respect for the right of indigenous peoples’ decision not to engage in the global economy. Further, it points to the need to promote dialogue among indigenous peoples, local communities, scientists, including meteorologists and climate experts, policymakers, and other relevant actors, to enable co-production of knowledge, and sharing of sustainable strategies to overcome risks and strengthen resilience to climate change. Read more about it at UN/DESA Policy Brief #101: Challenges and Opportunities for Indigenous Peoples’ Sustainability

In 2018, the Green Climate Fund (GCF) adopted an Indigenous Peoples Policy to ensure that GCF activities are developed and implemented in a way that fosters respect, promotion, and safeguarding of indigenous peoples.

IPBES’ approach for working with indigenous and local knowledge

In 2017, the 5th plenary of the Intergovernmental Science-Policy Platform on Biodiversity and Ecosystem Services (IPBES) approved the approach for working with indigenous and local knowledge and the establishment of a participatory mechanism for indigenous peoples and local communities (i.e. The Local Communities and Indigenous Peoples’ Platform) in the work of IPBES.

The platform seeks to strengthen the knowledge, technologies, practices, and efforts of local communities and indigenous peoples related to addressing and responding to climate change, as well as to facilitate the exchange of experience and the sharing of best practices and lessons learned on mitigation and adaptation in a holistic and integrated manner and to enhance the engagement of local communities and indigenous peoples in the UNFCCC process.

In 2016, the Secretariat of the Convention on Biological Diversity in collaboration with the International Indigenous Forum on Biodiversity (IIFB) and Forest Peoples Programme published Local Biodiversity Outlooks, a report on initiatives led by indigenous peoples and local communities that contribute to the successful implementation of the Strategic Plan for Biodiversity 2011-2020 and other related global agreements such as the Sustainable Development Goals (SDGs) and the Paris Agreement.

In 2012, the Food and Agriculture Organization of the United Nations (FAO) developed The Voluntary Guidelines on the Responsible Governance of Tenure of Land, Fisheries and Forests in the Context of National Food Security, which serve as a reference to improve the governance of land tenure to achieve food security for all, including indigenous peoples, and to support the realization of the right to adequate food in the context of national food security.