Educating Teachers about Nuclear Disarmament at the United Nations – UNODA 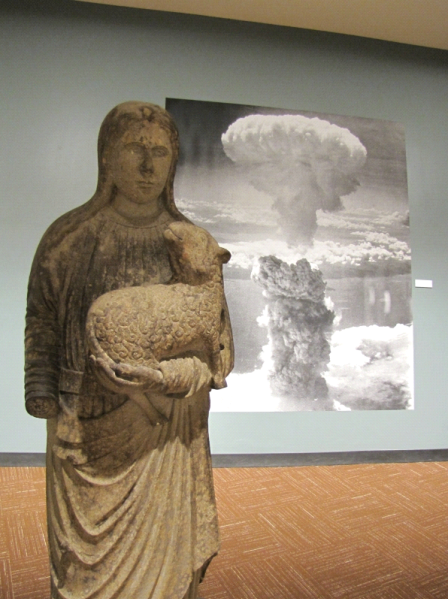 As part of its ongoing efforts on disarmament education, UNODA organizes an annual workshop for New York City Public School teachers on nuclear disarmament. On 3 November 2015, the fourth such workshop was held, in collaboration with Hibakusha Stories and Youth Arts New York. Thirty teachers took part that day, as New York teachers have a day for continuing professional education efforts (while their schools are turned into polling stations for local elections). The goal of the day was to instruct teachers on nuclear disarmament, and inform them about the available programmes to educate their pupils and what the UN has been doing in this regard.

The day started with a tour of the United Nations headquarters. The group visited the disarmament exhibition on the third floor. Several teachers noted how powerful it was to see the statue of Saint Agnes from Urakami Cathedral, which survived the atomic bombings in Nagasaki and other melted and twisted objects that had been deformed due to the intense heat caused by the blast.

After the tour, the instructive portion of the day commenced. John Ennis, Chief of the Information and Outreach Branch of UNODA explained how important disarmament education is to UNODA. He mentioned how he went to school in New York, and how he still remembers every single teacher he had. Teachers play a vital role in creating responsible citizens. Michael Spies, Political Affairs Officer at the Strategic Planning Unit of UNODA discussed the work that the UN does on nuclear disarmament. He also updated the audience on ongoing developments in the field. The teachers had the opportunity to ask questions afterwards about the issues that concerned both them and their students the most. Emilie McGlone of Peace Boat went through the book Action for Disarmament: 10 Things You Can Do!, which includes many ideas for youth to work for disarmament. She also mentioned that her NGO offers internships to high school students, if they want to further engage on this topic. Gabriel Florenz and Catherine Despont of Pioneer Works followed, which is an interdisciplinary open community space for the arts and sciences. Between 13 November and 20 December they are hosting The Hiroshima Panels, six monumental panels made by the Japanese artists Iri and Toshi Maruki, on the atomic bombings. As part of the exhibition, hibakusha (atomic bomb survivors) Setsuko Thurlow and Yasuaki Yamashita will share their experiences, as organized by Hibakusha Stories. There are special programmes for school classes to attend this. The morning UN teachers programme finished with a powerful testimony given by Miyako Taguchi, second generation hibakusha. The last presentation was especially moving, according to Maaike Verbruggen, intern at the Information and Outreach Branch of UNODA. Hearing about the personal experiences of Ms. Taguchi’s parents really brings home how destructive these weapons are, and strengthens the resolve to ensure they are never used again.

The afternoon was focused on the pedagogical side of things: how to bring the message of the imperative of nuclear disarmament to the classroom. The teachers were given the opportunity to share strategies, and picked up new ideas on how to incorporate this issue in their curriculum. Nathan Snyder of the NYC iSchool explained that as part of a class he teaches on nuclear nonproliferation, students measure and record radiation levels leftover from the Manhattan Project carried out at Columbia University. The teachers were also given resources on various aspects of nuclear disarmament, for further study for both them selves and their students.

Charles Cremeans, Social Studies teacher at the Frank Sinatra School of the Arts said that it was a great opportunity. He generally incorporates discussion on nuclear disarmament when he teaches about the atomic bombings of Hiroshima and Nagasaki, and he learned a lot of new aspects today of nuclear weapons, which he is planning to share with his students. 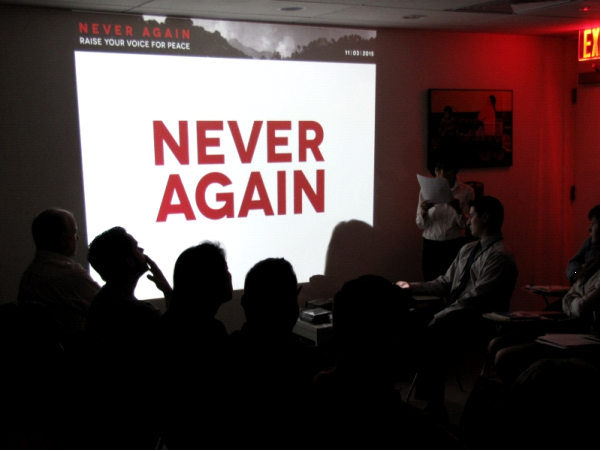