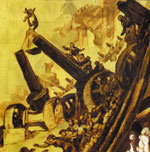 Disarmament and non-proliferation remain indispensable tools to help create a security environment favourable to ensuring human development, as enshrined in the letter and the spirit of the Charter of the United Nations. UNOG is a center venue for international diplomacy in this field. It is home to the Conference on Disarmament – the sole multilateral disarmament negotiating body – and provides, through the Geneva Branch of the Office for Disarmament Affairs, substantive and organisational support to a wide range of multilateral disarmament agreements. In addition, UNOG hosts a large number of disarmament-related conferences.

Under the Anti-Personnel Landmine Convention (APLC), the United Nations Secretariat has been given a number of tasks, which are carried out by the Geneva Branch of the Office for Disarmament Affairs. These include, inter alia, collecting Article 7 reports on measures taken to implement the Convention and updating the relevant database, maintaining the Article 8 (9) List of qualified experts, as well as the organisation of the meetings of States parties, which take place alternatively in a mine affected country and at the United Nations Office at Geneva.

As a result of prolonged efforts by the international community to establish a new instrument that would supplement the 1925 Geneva Protocol, the Biological Weapons Convention (BWC), the first multilateral disarmament treaty banning the production and use of an entire category of weapons, was opened for signature on 10 April 1972 and entered into force on 26 March 1975. All the meetings related to this instrument are currently being held in UNOG, and are serviced by the BWC Implementation Support Unit in the Geneva Branch of the Office for Disarmament Affairs.

The Convention on Prohibitions or Restrictions on the Use of Certain Conventional Weapons Which May Be Deemed to Be Excessively Injurious or to Have Indiscriminate Effects, also known as the Convention on Certain Conventional Weapons (CCW) or Inhumane Weapons Convention, comprises a convention and five protocols, which ban or restrict the use of various types of weapons that are considered to cause unnecessary suffering or that affect either soldiers or civilians indiscriminately. The weapons currently covered include weapons leaving undetectable fragments in the human body (Protocol I), mines, booby-traps and other devices (Protocol II), incendiary weapons (Protocol III), blinding laser weapons (Protocol IV) and explosive remnants of war (Protocol V). All the meetings related to this convention are currently being held in UNOG, and are serviced by the Geneva Branch of the Office for Disarmament Affairs.

In addition, UNOG is occasionally hosting other meetings related to disarmament and non-proliferation instruments such as certain sessions of the Preparatory Committee of the Review Conferences of the Nuclear Non-Proliferation Treaty (NPT), expert panels and seminars.