Depleted uranium (DU) is a toxic heavy metal and the main by-product of uranium enrichment. It is the substance left over when most of the highly radioactive isotopes of uranium are removed for use as nuclear fuel or for nuclear weapons. DU possesses the same chemical toxicity properties as uranium, although its radiological toxicity is less.

Due to its high density, which is about twice that of lead, DU has been used in munitions designed to penetrate armour plate. It can also be used to reinforce military vehicles, such as tanks. Munitions containing DU explode upon impact and release uranium oxide dust.

Various international organizations, including the World Health Organization, have undertaken studies on the potential effects of DU on human beings and the environment.

The United Nations Scientific Committee on the Effects of Atomic Radiation (UNSCEAR) continues to review the latest information in scientific literature on the effects on humans of internal exposure due to inhalation or ingestion of uranium, including DU. UNSCEAR has concluded that no clinically significant pathology related to radiation exposure to depleted uranium was found (See A/71/139).

In studies in which the International Atomic Energy Agency (IAEA) was involved, the resulting radiological risk to the public and the environment was not significant in situations where depleted uranium is observed in the form of localized contamination of the environment by small particles resulting from the impacts.

However, in the situations where fragments of, or complete, depleted uranium ammunitions were found, there is a potential risk of radiation effects for individuals who come into direct contact with such fragments or ammunitions.

This risk can be mitigated by national authorities through conducting such simple countermeasures as the collection, storage and disposal of such fragments.

Nevertheless, in a post-conflict environment, the presence of depleted uranium residues can further increase the anxiety of local populations. The results of the radiological assessments conducted by IAEA in cooperation with UNEP and WHO provide the basis for public reassurance. 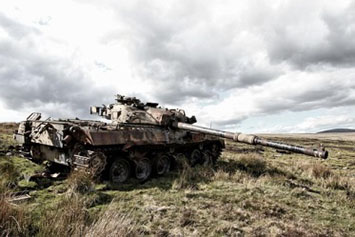