Their webinar discussions were part of a wider learning series organized by the United Nations Regional Centre for Peace and Disarmament in Asia and the Pacific (UNRCPD) to help the young leaders prepare for an upcoming meeting in the Republic of Korea on disarmament and non-proliferation topics. Participants in the ongoing learning series are joining virtual educational discussions as well as online courses offered through the Disarmament Education Dashboard of the United Nations Office for Disarmament Affairs (ODA). The webinars supported capacity-building and training for the Steering Committee project, which the Department of Peacebuilding and Political Affairs (DPPA) is leading in partnership with ODA.

In a video call from Kathmandu, UNRCPD’s Gender and Small Arms and Light Weapons project coordinator, Ms. Ida Scarpino, led Steering Committee members in China, Japan, Mongolia and the Republic of Korea in a virtual discussion on “Gender Perspectives for Disarmament and Arms Control”. Together, they explored how disarmament professionals address the role of gender in their work, while also examining the gendered nature of small arms and light weapons. 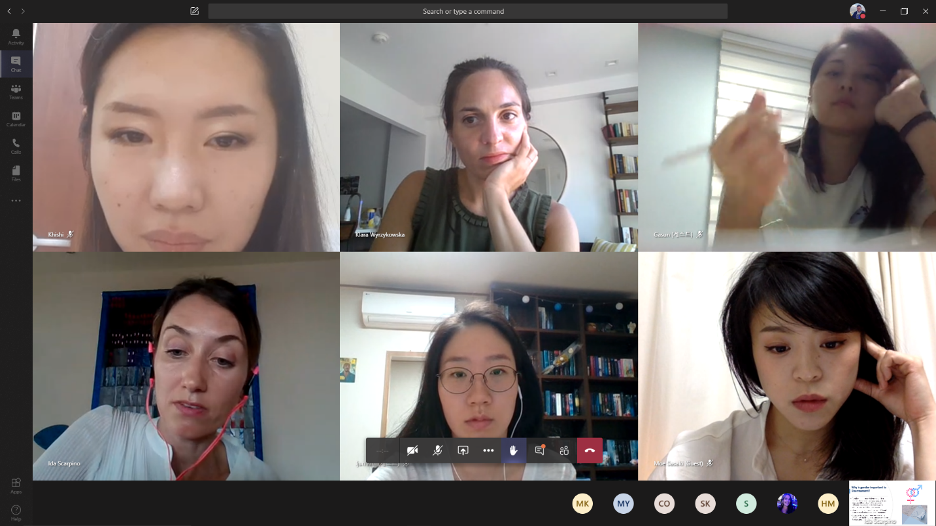 The Steering Committee then received a briefing from Mr. Steven Humphries, UNRCPD’s 1540 Project Coordinator, on two pillars of the Disarmament Agenda that are respectively focused on eliminating weapons of mass destruction and effectively regulating conventional arms.

In addition to outlining the substantive elements of the Disarmament Agenda and contextualizing them from an Asia security perspective, Mr. Humphries posed several questions that led to open discussion on topics that included nuclear deterrence theory, gendered aspects of weapons of mass destruction, conventional arms control practices and grassroots peace initiatives.

To apply what they learn, the Steering Committee’s members will take part in peer-to-peer education activities at a larger youth workshop on disarmament and non-proliferation set to take place in the Republic of Korea later in 2020, if conditions allow. As currently scheduled, the event would bring together 25 selected Northeast Asian youth ahead of a conference on disarmament and non-proliferation that the Ministry of Foreign Affairs of the Republic of Korea jointly organizes with ODA each year.

These activities build on UNRCPD’s engagement with DPPA and the Ministry of Foreign Affairs of Mongolia at their previous workshop on youth, peace and security, entitled “Perspectives for Dialogues in Northeast Asia”. Held in Ulaanbaatar in June 2019, this first-of-its-kind workshop contributed towards operationalizing the UN`s youth, peace and security agenda in the Northeast Asia subregion by establishing inclusive dialogue platforms, facilitating exchange of opinion and practice among generations, and creating momentum for young people to participate in regional discussions related to peace, security and preventive diplomacy. Notably, participants highlighted the importance of creating new opportunities for youth to learn about disarmament and arms control in order to raise their level of meaningful engagement and participation in peace and security activities.

The current webinar series represents the cumulation of this key recommendation from the 2019 event, showcasing UNRCPD’s ongoing commitment to raising awareness, providing education opportunities, and creating spaces for youth to take part in broader political, geopolitical, security and societal discussions, consultations and decision-making.

UNRCPD looks forward to continuing to engage with, listen to and support the ideas of Northeast Asian youth over the coming months. Their work together was a part of ODA’s #Youth4Disarmament initiative and took place within the framework of the youth, peace and security agenda. It also was a part of UNRCPD’s broader disarmament education work, whose aim to foster learning that will advance our collective security as well as sustainable development.