On 8 March, parliamentarians and civil society actors across Asia and the Pacific marked International Women’s Day with a workshop on the results, challenges and opportunities of a multi-year project tackling how illicit small arms and light weapons (SALW) impact people differently based on their gender. The virtual meeting followed on from a series of workshops held in Asia and the Pacific between 2018 and 2020.

The virtual event on “Gun Violence and Illicit Small-Arms Trafficking from a Gender Perspective” brought together small arms and light weapons control experts to interact with parliamentarians as well as civil society organizations from 12 countries of the region: Afghanistan, Bhutan, Cambodia, Fiji, India, Lao People’s Democratic Republic, Nepal, New Zealand, Pakistan, the Philippines, Sri Lanka and Timor-Leste. The exchange was co-organized by the United Nations Regional Centre for Peace and Disarmament in Asia and the Pacific (UNRCPD) and the International Action Network on Small Arms (IANSA) in the framework of the global project on gender and small arms and light weapons, funded by the European Union (EU). 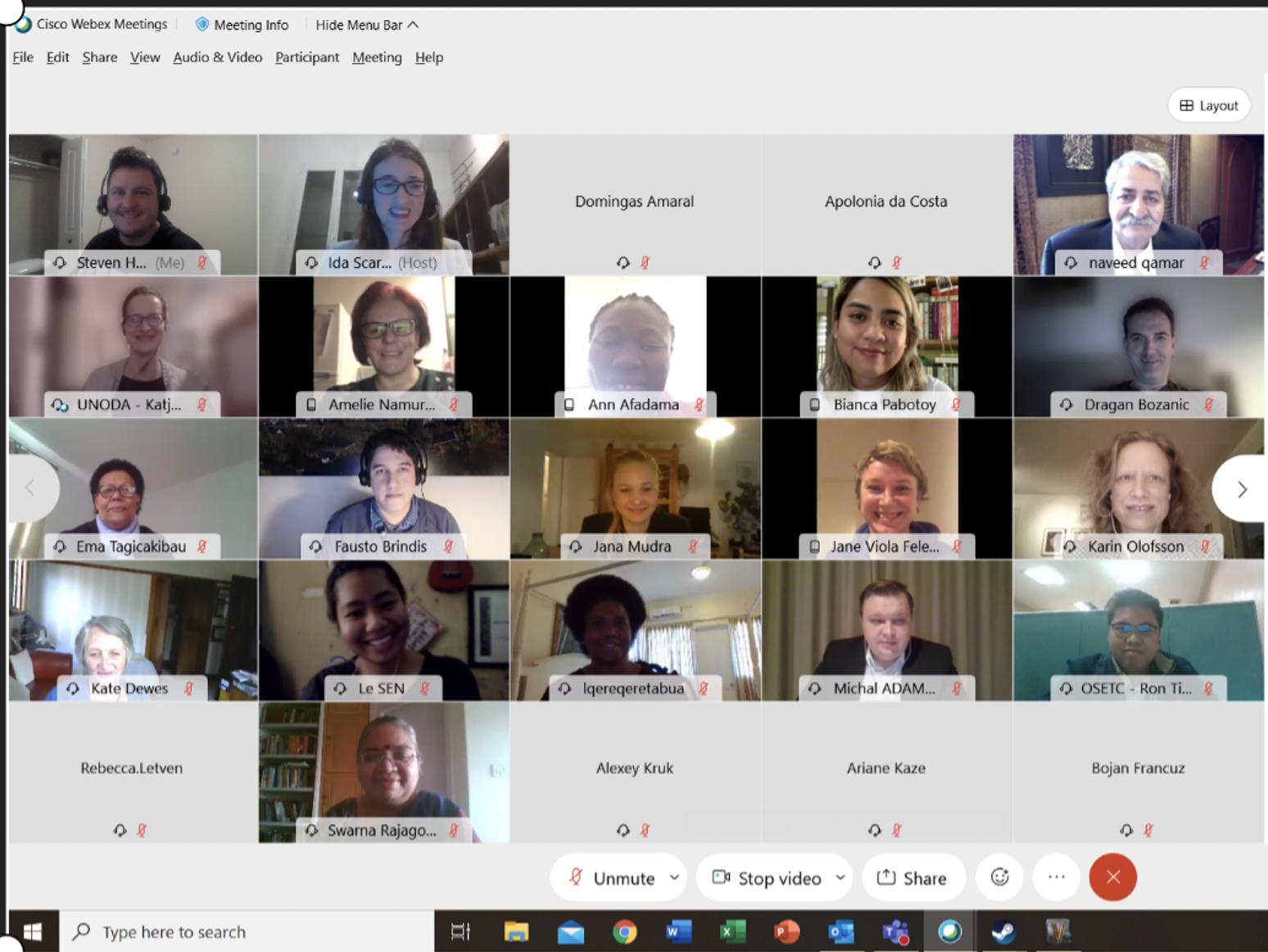 Thirty-six people, including project participants and experts, connected to the event from different countries from the Asia-Pacific region and across the world.

Ambassador Marjolijn van Deelen, the EU Special Envoy for Non-proliferation and Disarmament, kicked off the meeting with a video message highlighting the Security Council’s milestone resolution on the role of women in peace and security. “[Women’s] unique experiences are crucial and unique in peace processes. There is not real peace and security without them”, she said. 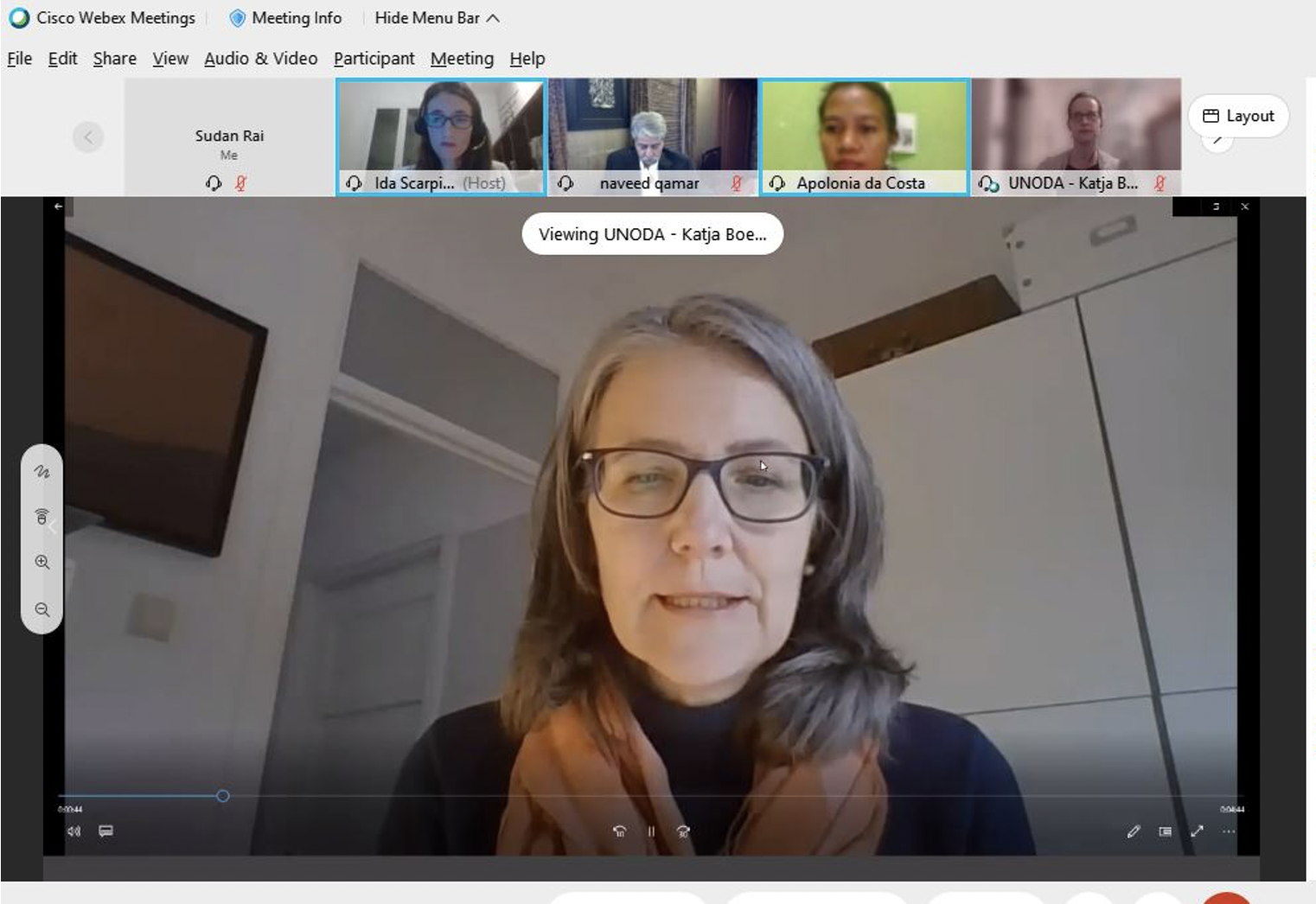 The EU Special Envoy for Non-proliferation and Disarmament, Ambassador Marjolijn van Deelen, welcomed the participants through a video message.

The United Nations High Representative for Disarmament Affairs, Ms. Izumi Nakamitsu, urged decision-makers to “fast-track” efforts to achieve gender equality in the field of disarmament and arms control. “We simply make better and smarter decisions when diverse experiences are brought together by policymakers,” she said in pre-recorded remarks.

Next, Ms. Karin Olofsson, the Secretary General of the Parliamentary Forum on Small Arms and Light Weapons, moderated an expert panel of parliamentarians and civil society representatives.

Hon. Mr. Syed Naveed Qamar, a member of the National Assembly of Pakistan, began this discussion by reflecting on his country’s measures to tackle illicit small-arms trafficking, including efforts towards acceding to the international Arms Trade Treaty. He said the Government’s focus on combating the global pandemic has shifted attention away from advancing SALW control initiatives, thus hampering progress towards accession. 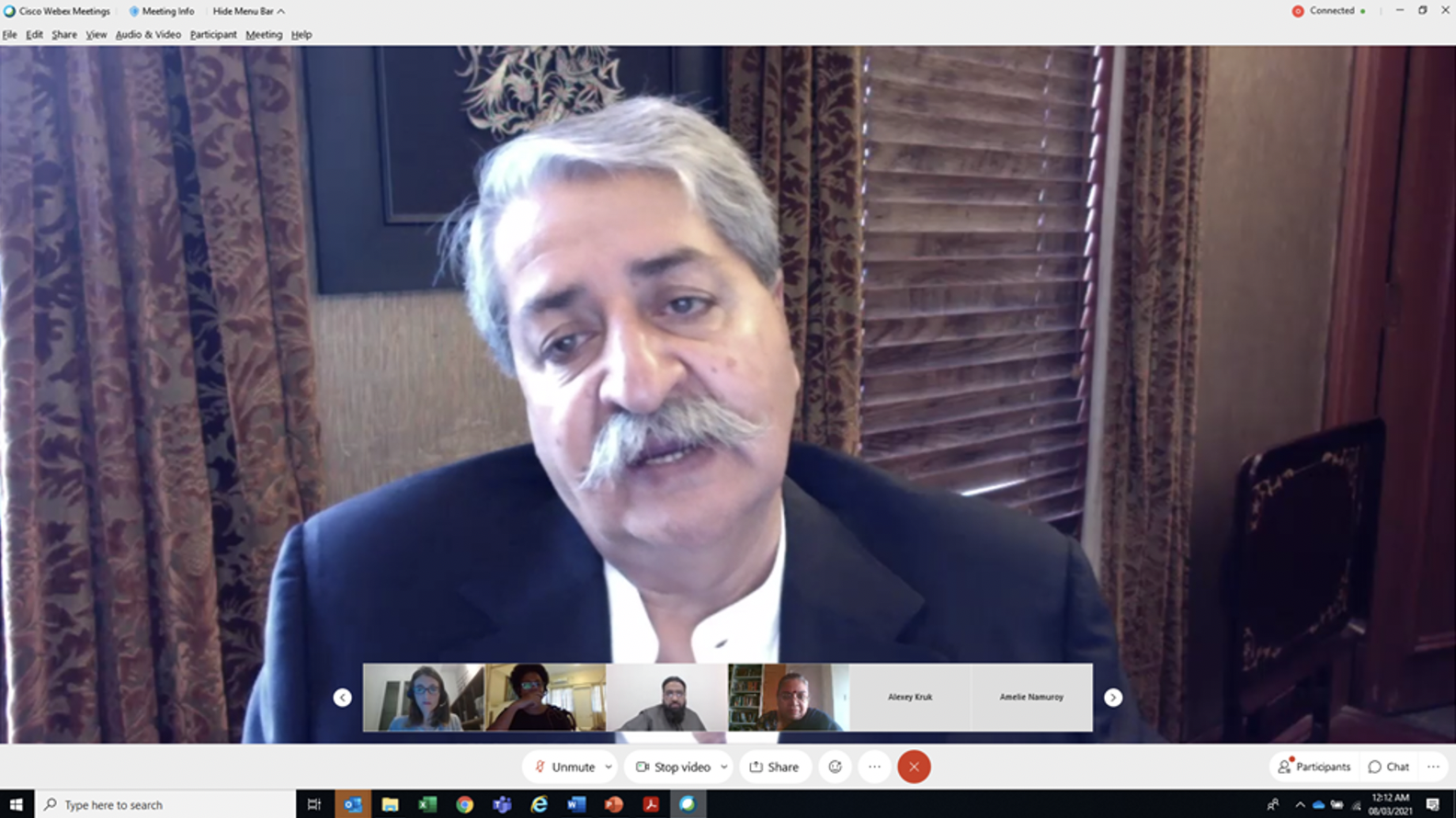 Hon. Mr. Syed Naveed Qamar, member of the National Assembly of Pakistan, discussed what efforts his country is undertaking to make progress on small arms control.

Hon. Ms. Lenora Qereqeretabua of Fiji reported a similar situation in her country. She added, though, that she remained committed to further small arms control efforts, particularly after discoveries of illegally imported ammunition in recent years, as well as the “potential threat of escalation in the lead-up to the next general election”, have underscored the need to take decisive action. 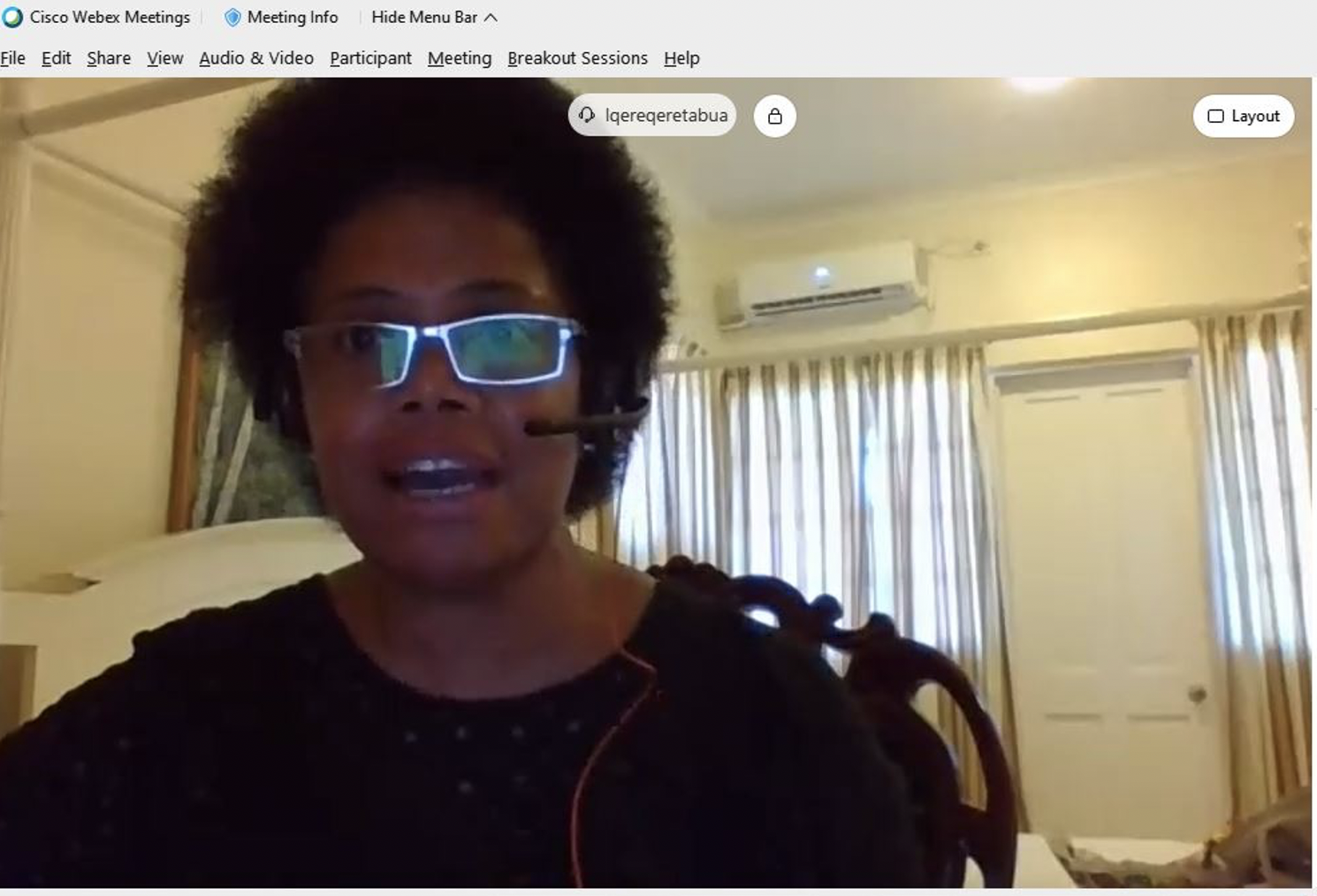 As States continue devoting much of their attention to the global health crisis, the wider public has a role to play in ensuring that topics of peace, disarmament, security and gender equality are not forgotten. Dr. Swarna Rajagopalan, founding trustee of the Prajnya Trust, shared how her organization and its partner Sansristi organized a series of virtual lectures on gender and disarmament to engage on these themes with interested university students. 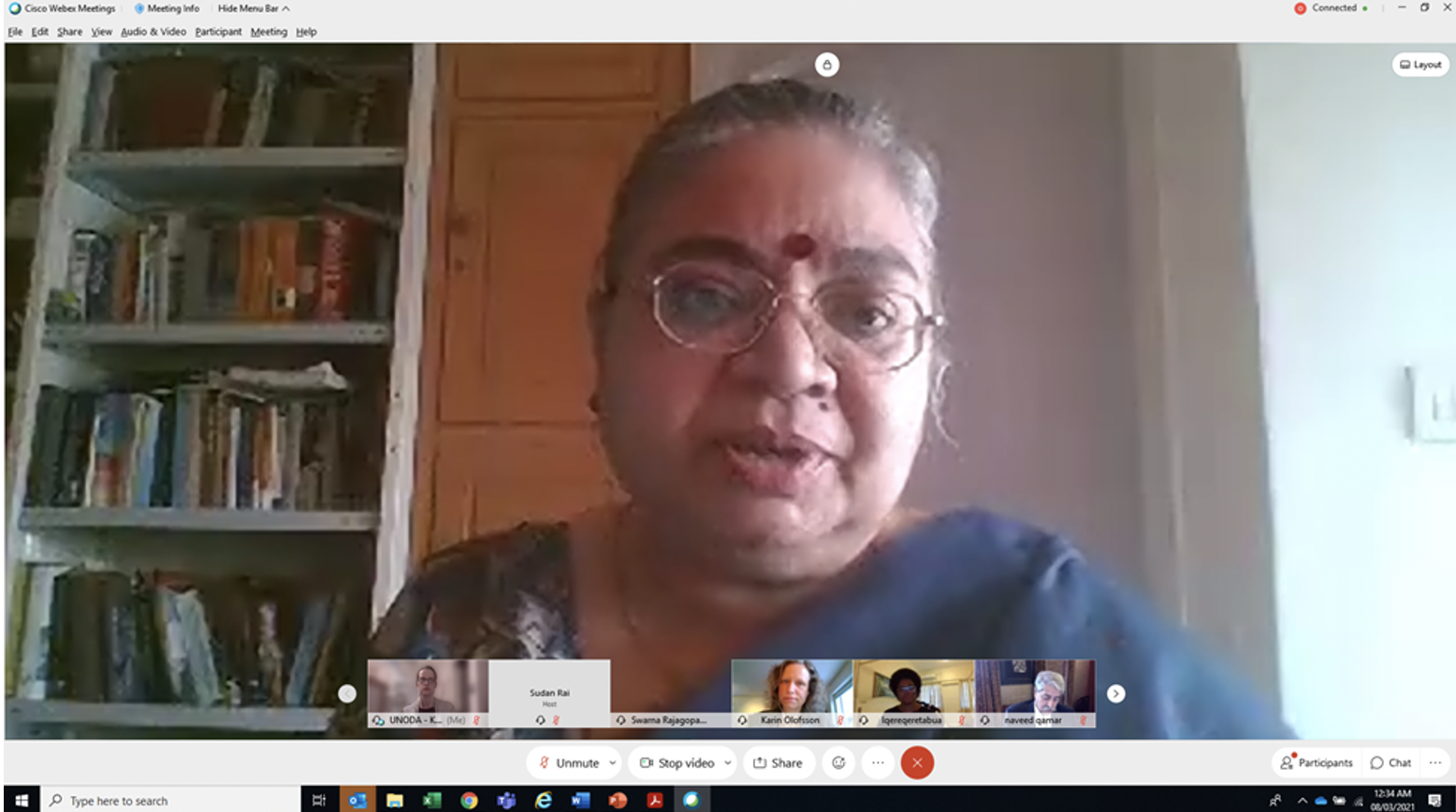 Dr. Swarna Rajagopalan, founding trustee of the Prajnya Trust, discussed the need for ongoing engagement with the broader public on matters related to international peace and security.

Mr. Wahid Safi, programme manager at the Afghan Women’s Network, noted that over 90 per cent of community members in Afghanistan possess a weapon because “people feel safer with a weapon in the household, due to the deterioration of the security situation”. He said that this worrying finding—from a recent SALW survey and research on gun violence by the Afghan Women’s Network—also underscored that the proliferation of SALW has a disproportional impact on women.

Ms. Katja Boettcher, Political Affairs Officer in the Conventional Arms Branch at the United Nations Office for Disarmament Affairs, said States would have an opportunity to take concrete action at the forthcoming Seventh Biennial Meeting of States (BMS7) on the Programme of Action on SALW. BMS7, she said, would be a key moment for countries to consider the national, regional and global implementation of both the Programme of Action and its International Tracing Instrument (ITI).

Sharing a preliminary analysis of States’ 2020 reports to date, Ms. Boettcher underlined that only 12 countries in the Asia-Pacific had reported on their implementation of the Programme of Action. Of those countries, 6 confirmed taking gender considerations into account and 5 confirmed collecting sex- and age-disaggregated data.

Ms. Katja Boettcher presented the status of national reports under the Programme of Action (PoA) to prevent, combat and eradicate the illicit trade in small arms and light weapons in all its aspects and its International Tracing Instrument (ITI).

Dr. Ema Tagicakibau, a research and training consultant in gender, women’s rights and disarmament as well as IANSA’s focal point for the Asia-Pacific, concluded the exchange by presenting a forthcoming “Call to Action by civil society” in preparation for BMS7. Endorsers of the document will call on Member States to continue mainstreaming gender in small arms control through concrete actions aimed at, inter alia, (a) ensuring women’s full and meaningful participation in all policymaking, planning and implementation process related to SALW control; (b) collecting sex- and age-disaggregated data and supporting research on gender specific impacts of small arms; (c) addressing gender stereotypes in SALW control decision-making processes and fora; and (d) tackling (armed) gender-based violence, which has increased significantly during the COVID-19 pandemic. 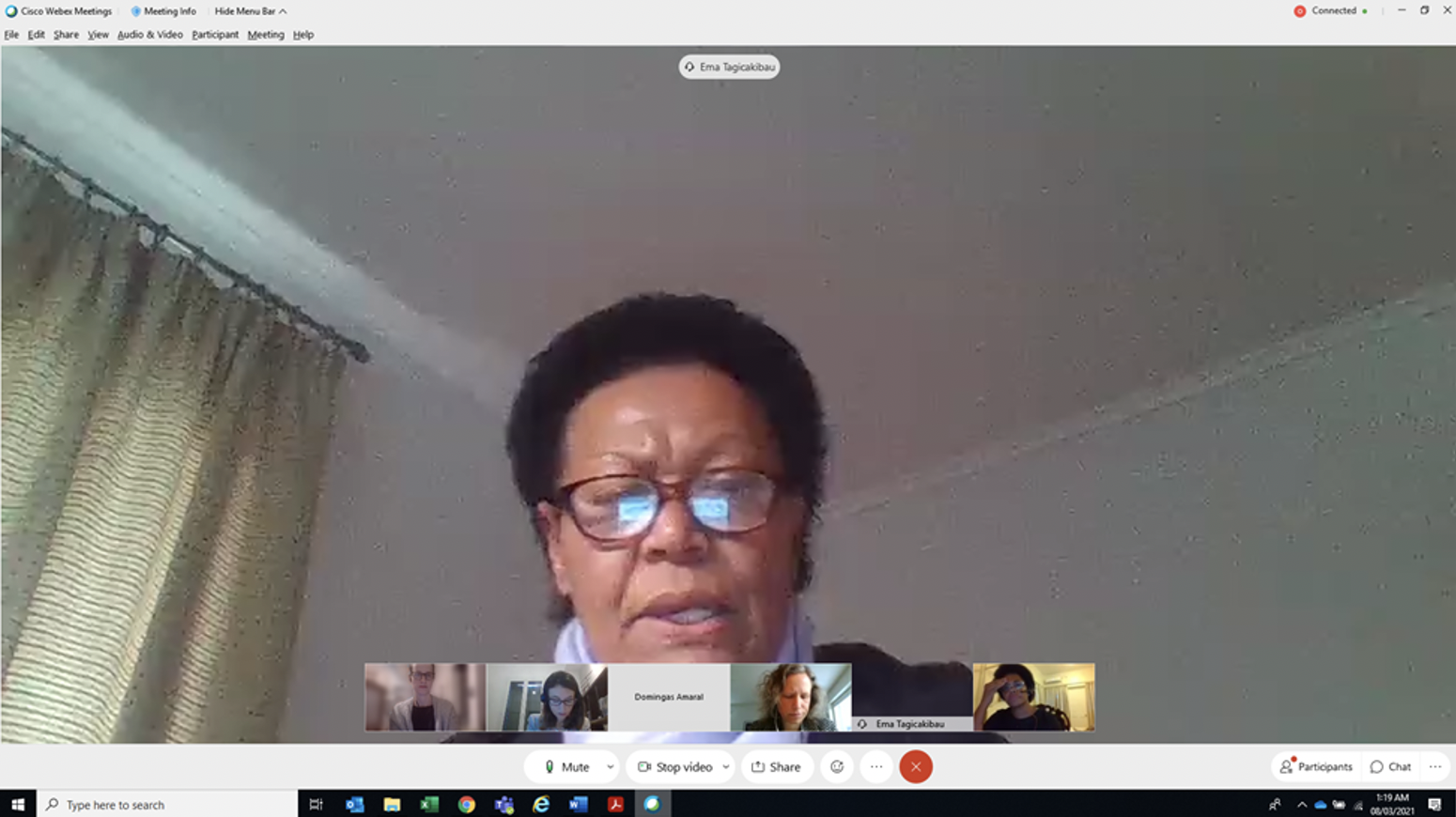 Dr. Ema Tagicakibau spotlighted a“Call to Action by civil society” in preparation for the Seventh Biennial Meeting of States (BMS7) to consider the national, regional and global implementation of the Programme of Action (PoA) in July 2021.

The recording of the meeting can be watched here.

UNRCPD has also published a compendium of activities, outcomes and recommendations collected during the project on “Gun Violence and Illicit Small-Arms Trafficking from a Gender Perspective”.