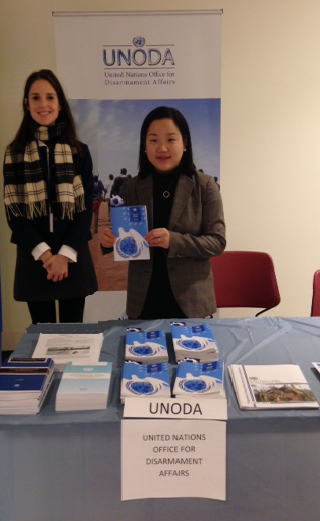 UNODA’s attendance at this year’s Conference is noteworthy: not only does 2015 herald the seventieth anniversary of the establishment of the United Nations, it also marks seventy years since the bombings of Hiroshima and Nagasaki. For UNODA, whose mandate includes nuclear disarmament and non-proliferation, the coincidence of these two anniversaries is an important reminder of the ongoing need for education about disarmament matters. In this way, UNODA shares CTAUN’s vision of promoting education so as to equip future generations to seek to resolve conflict through diplomacy rather than with violence and weapons.

Friday’s conference attracted over four hundred elementary, secondary and tertiary educators and university students from a diverse range of fields. UNODA enjoyed this unique opportunity to promote understanding and awareness of disarmament by engaging in discussions with Conference participants. Informational material was also distributed, including our instructive book, “Disarmament: a Basic Guide for Students”, fact-sheets on various subjects such as disarmament and non proliferation education, humanitarian approaches to disarmament and gender perspectives on disarmament and arms control, and bookmarks that provide a link to the wealth of teaching materials on the disarmament education website. 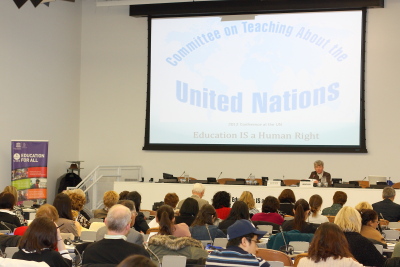