Armed conflicts are a tragic reality of the world that we live in. However, as set out in the Convention on Certain Conventional Weapons (CCW), conventional weapons that are excessively injurious or whose effects are indiscriminate need not be part of this reality. 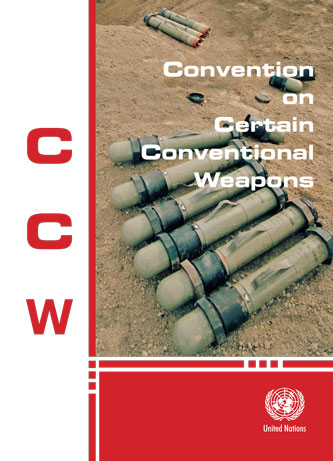 The CCW is an important instrument of international humanitarian law. The CCW’s unique structure allows for the negotiation of new protocols. United Nations Secretary-General Ban Ki-moon said “A key strength of the Convention is its responsiveness to humanitarian issues raised by developments in weapon technologies and armed conflicts.”

A priority of the CCW States Parties is expanding the Convention’s membership. Currently there are 118 States Parties to the CCW and the latest country to join is Iraq.

This CCW Booklet provides a brief background and history to the Convention and its Protocols, interesting facts on the CCW, information on how States can join and participate in the CCW’s meetings, and the mandate of and support provided by the CCW Implementation Support Unit.

This booklet is designed to be a guide for those States considering joining the CCW and a useful resource for those working to promote universalization.