On Monday 7 October 2014, on the sidelines of the first day of the First Committee of the UN General Assembly, the New Zealand Permanent Mission to the United Nations organized a High Level Discussion to mark the launch of UNODA Occasional Paper Number 26, entitled ‘The New Zealand Lectures on Disarmament’.

This series of lectures were delivered by the High Representative for Disarmament, Ms. Angela Kane across New Zealand, addressing policy-makers, faculty members, students and others interested in current disarmament issues in April 2014. During the lectures, Ms. Kane outlined her vision regarding the prospects, possibilities and potential pitfalls of multilateral disarmament. In addition, she focused on several pressing issues, such as the “disarmament taboo”, the role of parliamentarians in disarmament and the relationship between emerging issues and disarmament education.

The New York event was chaired by New Zealand’s Ambassador for Disarmament, Ms. Dell Higgie, who stressed the importance of disarmament for her country. In her opening speech, Ms. Kane, encouraged the participants to get to work on disarmament, guided by the conviction that such cause is just and worthy of the respect of our fellow citizens everywhere and the future generations. Then, Mr. Courtenay Rattray, Chair of the 69th session  of the First Committee, took the floor and praised the High Representative for the excellent lectures, which, according to him, constituted a prime means for grassroots mobilization. Moreover, he called Ms. Kane’s leadership remarkable. Ambassador Rattray also highlighted the necessity to recommit to multilateralism in order to strengthen global disarmament norms and to revive the “disarmament machinery”.

Subsequently, the next panelist, Mr. Jorge Lomonaco Tonda, the Permanent Representative of Mexico to the United Nations in Geneva, suggested that the world should pursue disarmament, in particular the elimination of nuclear weapons, as a collectivity: ‘Not only should we fulfill our obligations and commitments, we should also establish a verification system with regard to nuclear weapons, along the lines of the work conducted by the Organisation for the Prohibition of Chemical Weapons’. He added that the current impasse in the Conference of Disarmament was a collective failure. Lastly, Mr. Desra Percaya, the Permanent Representative of Indonesia to the United Nations in New York, shared his thoughts, during which he stressed the importance of delivering the disarmament message beyond the walls of the United Nations, in order to mobilize political constituencies around the world and as such force political leaders to finally take action.

Following the remarks of the panelists, an interesting interaction between the panelists and attendees took place. During the debate, several compelling issues were raised, such as the fragile balance between the national security interests of a state and its potential disarmament efforts.

Article and photos by Sanne Verschuren 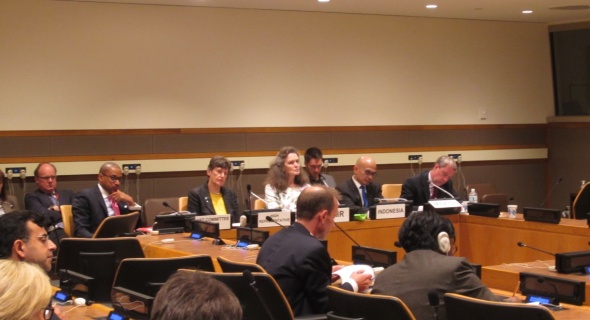