In a joint effort with its NGO partner, the Harmony for Peace Foundation, the Office for Disarmament Affairs (UNODA) has launched an exhibit of the twelve original winning artworks from the “Art for Peace” contest at UNHQ to mark the first observance of the International Day for the Total Elimination of Nuclear Weapons, which will be observed on 26 September 2014. The works of art are located at the northern end of the first floor of the Conference Building.

The exhibit is part of the events to commemorate the International Day for the Total Elimination of nuclear weapons, which is an initiative of Indonesia on behalf of the Non-Aligned Movement (NAM). The Day provides an occasion for the world community to reaffirm its commitment to global nuclear disarmament as a high priority. It provides an opportunity to educate the publicabout the real benefits of eliminating such weapons, and point out the social and economic costs of perpetuating them. Commemorating this Day at the UN is of great importance given its universal membership and its long experience in grappling with nuclear disarmament issues.

As interns at UNODA helping with the installation on Sunday afternoon, Sanne Verschuren and Sourabhi Mukherji said “we are honored to be part of such an initiative which fundamentally aims at achieving a world without nuclear weapons. Young people – like us, other UN interns, and the 12 winners – provide an original, innovative and fresh approach towards disarmament issues”.  Soohyun Kim, Political Affairs Officer with Disarmament Affairs, who supervised the installation, said that “the initiative is an excellent opportunity and platform to showcase how youth envision a peaceful future for the heavily armed world and thus perfectly illustrates the importance of disarmament education”.

In 2012, UNODA launched the Art for Peace Contest for children and teenagers across the globe, aged 5 through 17, who were asked to “Imagine a World Free of Nuclear Weapons.” UNODA received more than 6,600 entries from 92 countries.  The results of that competition, which were made into a UN calendar can be viewed here (link to http://www.unartforpeace.org)

Announcing the winners of the contest in 2012, Angela Kane, High Representative for Disarmament Affairs said “How reassuring it is then to see a new generation coming into this world with a different vision of the future of our planet — a vision expressed in over 6,000 works of art submitted by children from 92 countries, all focused on ‘Imagining a World free of Nuclear Weapons’”. “I hope this contest will serve as a first step to achieving such a world.”

Article and photographs by Sanne Verschuren and Sourabhi Mukherji

Photos of the Exhibit 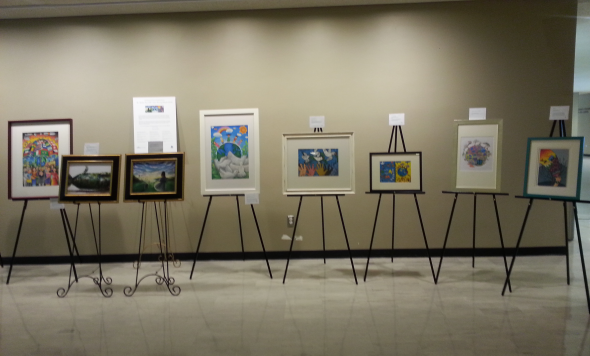 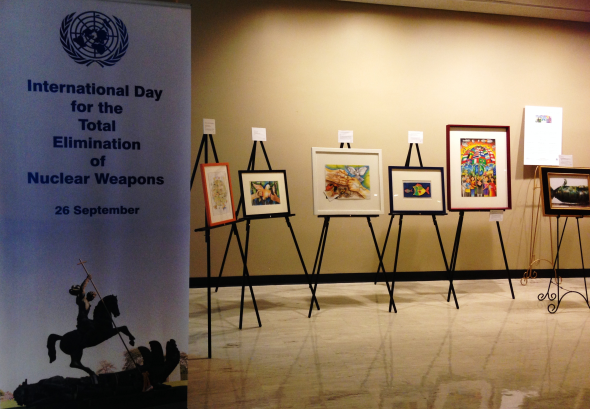 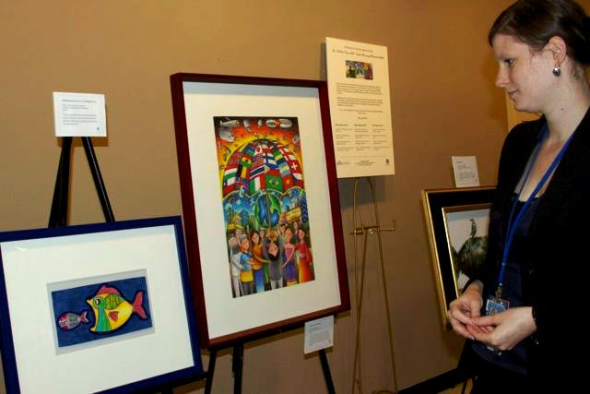