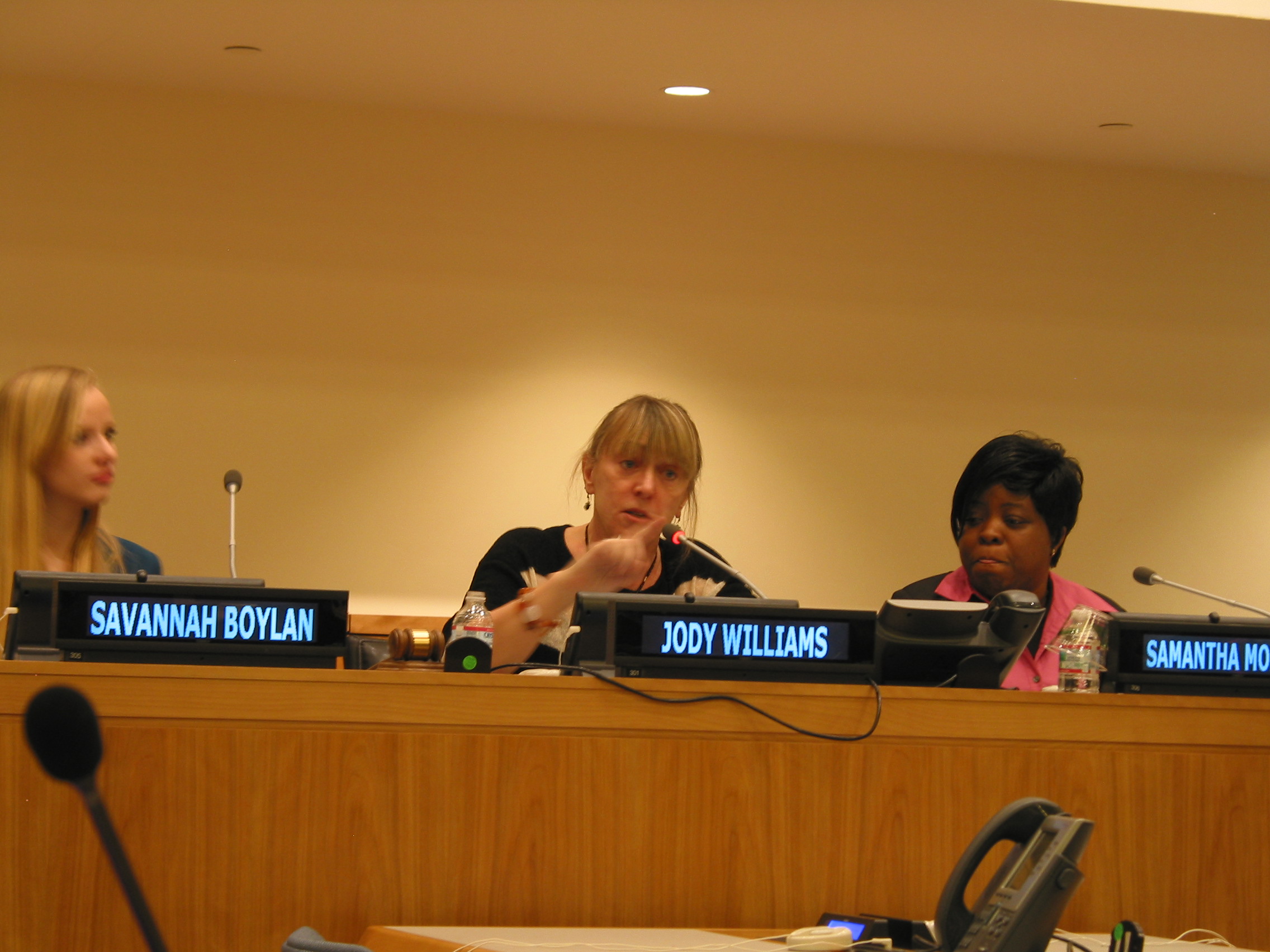 Nobel Peace Prize winner and grassroots activist Jody Williams came up to all the participants right before the event and started to shake everyone’s hand introducing herself as Jody.

Her actions set the tone for a clear demonstration of what kind of activism Jody Williams pursues, grassroots campaigning that addresses people on a personal level.

The event, held at United Nations Headquarters on 11 February 2014, was chaired by Ramu Damodaran, the Deputy Director for Partnerships and Public Engagement in the United Nations Department of Public Information’s Outreach Division. He reminded the audience of the tremendous achievement that Ms. Williams made for both the United Nations and the victims of the scourge of landmines: “She helped governments to gather, to conclude an international treaty that bans landmines: the Mine Ban Treaty also called the Ottawa Treaty”. 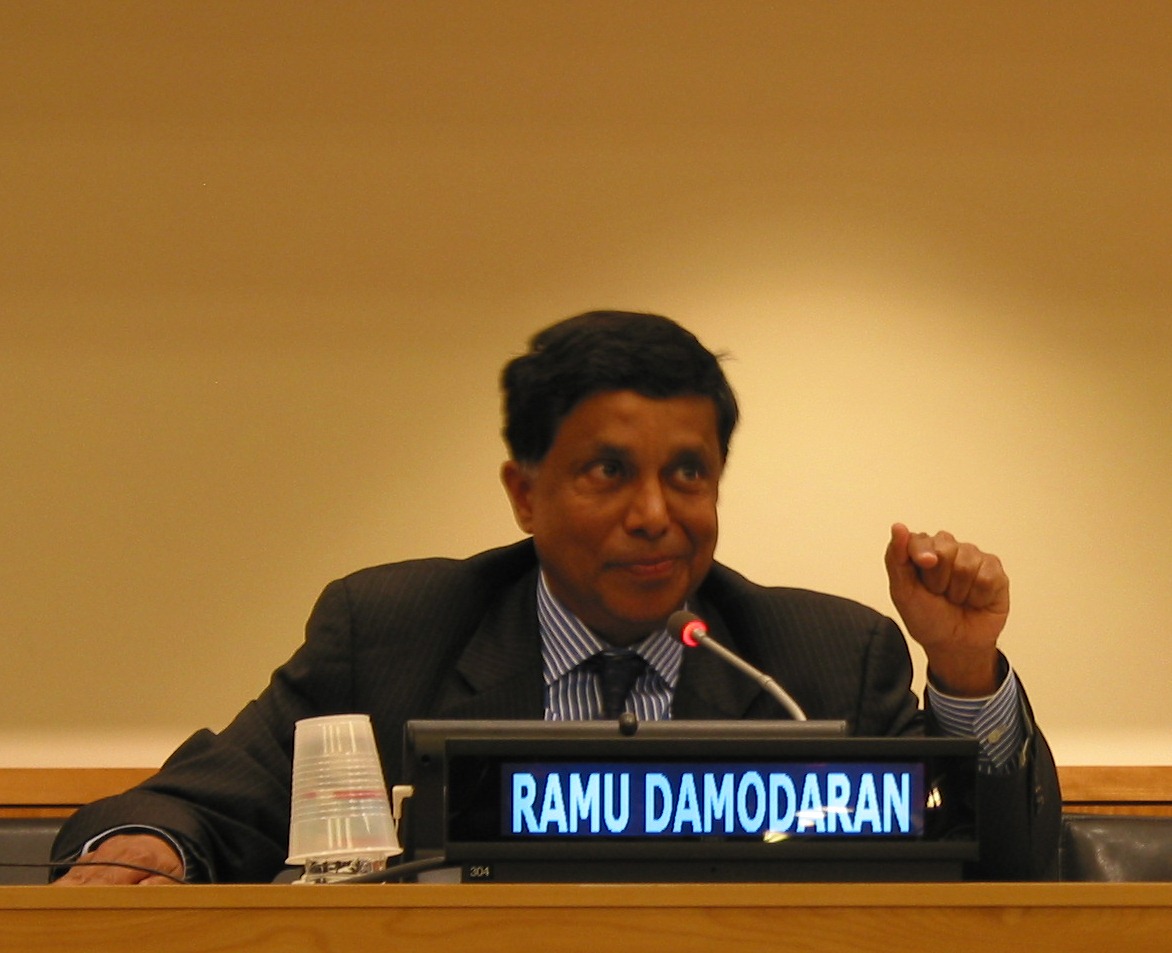 Her tactics and passion for activism have proven to be very effective, with more than 80% of UN Member States now being signatory to the International treaty banning landmines, a citizen’s initiative behind which Ms. Williams was the driving force. While not signed by all, the Treaty is adhered to by most of the influential non-signatory states. Some believe that countries like the United States have refused to sign the Treaty out of reluctance to give into demands of civil society to ban a particular weapon. According to Ms. Williams, “the US military feared that if they gave in to civil society and gave up that weapon, we would go on with other weapons”.

Nevertheless, her work with civil society has stigmatised the use of landmines so that countries such as Russia, China or the US no longer dare to provoke the international community by defending the use of landmines. As for the US, even if has not yet signed the Treaty it has obeyed the basic provisions of the Treaty and is one of the biggest contributors to the landmine Treaty so far through its contribution to landmine clearance in various parts of the world that remain the most affected.

Ms. Williams is passionate that countries do respond to civil society pressure and activism, and that civil society can accomplish something on a grand scale. 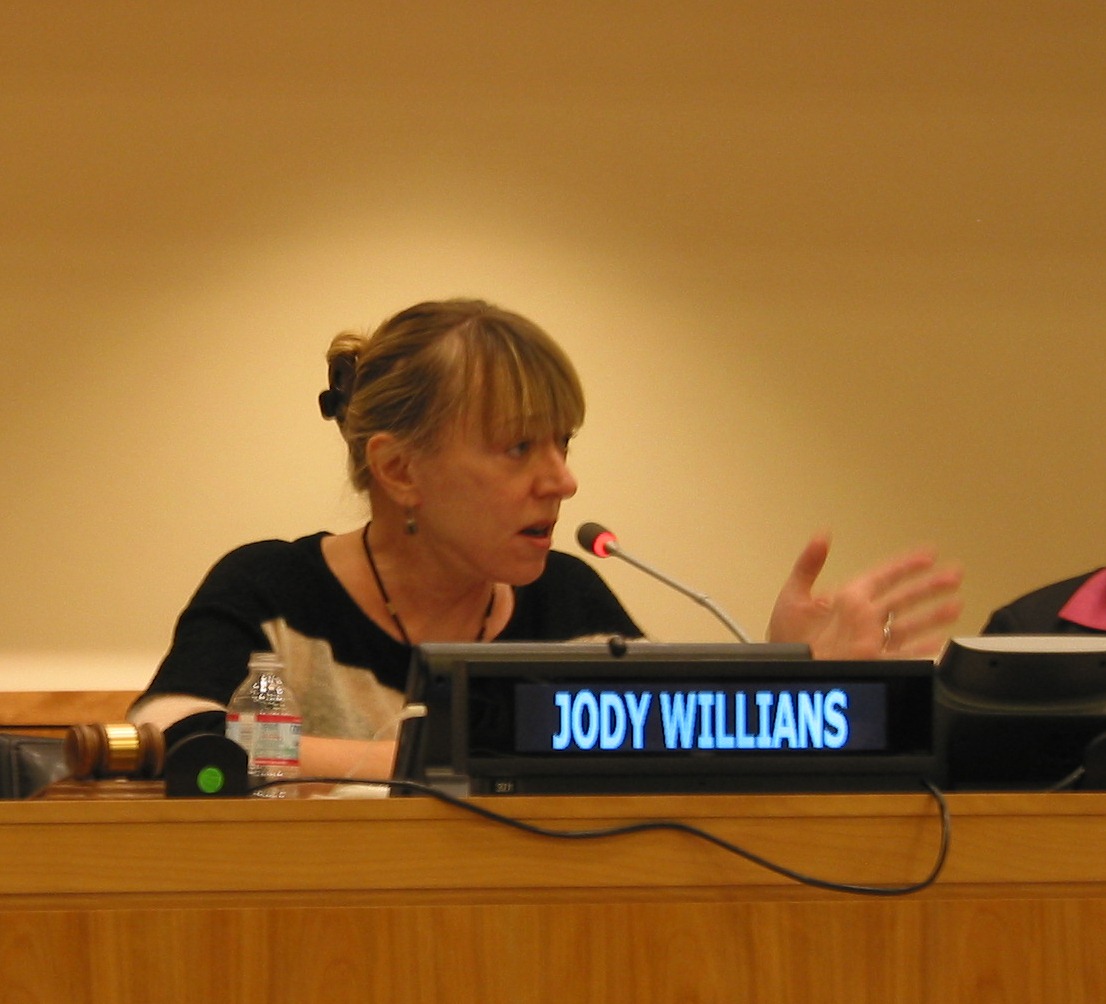 Following questions by the students in the audience on what drives Ms. Williams to do what she does, she revealed that it was the U.S. military involvement in southeast Asia in 60’s and 70’s that started her passion for activism; protesting against a war in which she said “our innocent men went there to kill other innocent humans”. Jody Williams insists on the fact that she is a grassroots activist. What makes her excited is to help ordinary people and make them understand that by sharing their actions, they have power to have an impact.

First, in order to make a cause move forward, the main thing is to be aware that one cannot save the world all at once and the need to pick up the one thing that you care about the most.

Second, do not pay attention to the image you reflect on others. There will be people who will tell you that you are utopian: “It’s not easy to decide that you don’t care about what people think. The more we accept them telling us what they want us to be, the more they will exert their power”.

Third, activism comes from spending time to put forward a cause, even by volunteering a few hours a month, as long as you actually act for the cause. “Signing a petition online though is not activism”. The root of the word activism is “act”. The action has to be made with the intention of making something better for everyone.

And that might be the hardest thing after all. She explained that this kind of commitment requires a kind of love that does not ask you to love everyone naively but to accept differences of opinion and ensure that other voices are permitted to be heard. “Love that allows others to live their lives the way they want to, as long as they do not invade countries just because they can or to violate human rights”. This brought a student to ask: “When you said you don’t care about what others think of you, how do you then recognise right from wrong?” In reply Ms. Williams stressed that humans know by essence how to distinguish right from wrong in the way that they are led by the belief; “Don’t do something to somebody that you wouldn’t like being done to you”. Ms. Williams said that the three topics she currently feels strongly about are the environment, and how humans keep exploiting the planet and ruining it for future generations; rape as a tool of war, since, in her view, the role of gender and the exceptional suffering of women has been given far too little attention; and the future use of autonomous weapons, against which she has launched a campaign to pre-emptively stop killer robots. By using simple, straightforward language, Jody Williams captivated her audience.

Text and photos by Nathalie Van Raemdonck and Sophie Durut