Thirty-four technical experts from Central American and neighbouring countries met in San José, Costa Rica, from 31 January to 1 February 2013 for stockpile management and small arms and ammunition destruction training. The event was co-organised by the Ministry of Public Security of Costa Rica and the United Nations Regional Centre for Peace, Disarmament and Development in Latin America and the Caribbean (UNLIREC), and was made possible thanks to the generous support of the Federal Republic of Germany. 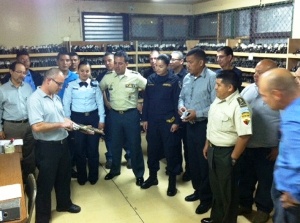 This regional seminar brought together professionals and practitioners in the field of stockpile management to enable them to exchange information, examine best practices and strengthen their networks of contacts. Stockpile management training was based on the United Nations International Small Arms Control Standards (ISACS) and the International Ammunition Technical Guidelines (IATG), the latter having been recently approved by the United Nations General Assembly.

This workshop forms part of a UNLIREC assistance package entitled “Preventing Armed Violence in Central America through the Combat of Illicit Trafficking in Firearms,” which supports the efforts made by Central American States to improve public security and enhance implementation of the United Nations Programme of Action to Prevent, Combat and Eradicate the Illicit Trade in Small Arms and Light Weapons in All its Aspects.