14 December 2012 — The United Nations Office for Disarmament Affairs today released the electronic publication, Occasional Paper No. 22 – Options for the Further Strengthening of the NPT’s Review Process by 2015, written by Thomas Markram. The publication is currently available as a downloadable PDF document. 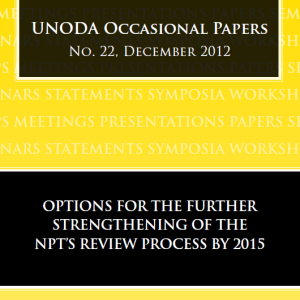 The below text is quoted from the paper’s abstract.

Parties participating in the 2010 Review Conference of the Treaty on the Non-Proliferation of Nuclear Weapons (NPT) could not devote the necessary focus to the further strengthening of the review process of the Treaty and therefore decided
to defer its consideration to the next review cycle. Consequently, specific time was therefore allocated to addressing the issue at the first session of the Preparatory Committee for the 2015 Review Conference, held in Vienna from 30 April to 11 May
2012. Although a number of States parties expressed an interest in continuing the examination of means to improve the effectiveness of the strengthened review process of the Treaty during the PrepCom, there is little forward movement taking place.

This paper examines the proposals that have been put forward thus far and
attempts to offer some views and some possible options that might be of some
use in the further preparations on this issue during this review cycle. Commentary
is provided on the various proposals that appear practical and could incrementally
improve accountability and efficiency as well as provide greater continuity and
substantial savings. This includes smarter use of the time for substantive consideration,
on the general debate and early establishment of subsidiary bodies, on moving to
digitized records, on the establishment of an NPT Secretariat and the enhancement of
participation by non-governmental organizations. Other options for consideration on
subjects of concern are also identified and discussed.

This paper is a slightly revised version to a paper prepared in March 2012 and made available to participants in the Annecy meeting organized by the James Martin Center for Nonproliferation Studies.