The United States, as a Depositary of the Convention on the Prohibition of the Development, Production and Stockpiling of Bacteriological (Biological) and Toxin Weapons and on Their Destruction (BWC), has confirmed that the Marshall Islands deposited its instrument of accession to the Convention on 15 November 2012, and therefore became the 166th State Party to the BWC with effect from that date. 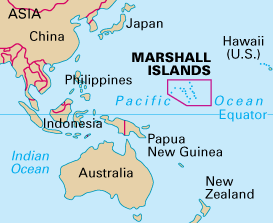 The Biological Weapons Convention (BWC) opened for signature in 1972 and entered into force in 1975. It prohibits the development, production, acquisition, transfer, retention, stockpiling and use of biological and toxin weapons. It was the first international treaty that bans the production of an entire category of weapons. The BWC, along with the Nuclear Non-proliferation Treaty and the Chemical Weapons Convention, is one of the key components of the international community’s effort to address the proliferation of weapons of mass destruction.