20 August 2012 — Ms. Angela Kane, United Nations High Representative for Disarmament Affairs visited Japan in August 2012 to represent United Nations Secretary-General Ban Ki-moon at the Hiroshima and Nagasaki peace memorial ceremonies as well as deliver a message on his behalf to the Global Forum on Disarmament and Non-Proliferation Education. In addition she had a number of other meetings including with Parliamentary Vice-Minister for Foreign Affairs, Mr. Joe Nakano.

Prior to her visit, Ms Kane was interviewed by NHK television in New York about her expectations for the visit and her thoughts on the work of the UN to eliminate nuclear weapons.

On 6 August, the 67th anniversary of the bombing of Hiroshima, Ms. Kane delivered the Secretary-General’s message at the Hiroshima peace memorial in which he stated that “there must never be another nuclear attack — never. The elimination of nuclear weapons is not just a visionary goal, but the most reliable way to prevent their future use.”

Also on 6 August, High Representative Kane delivered the keynote address, “A World Set Free of Nuclear Weapons”,
at the 2012 World Conference Against Atomic and Hydrogen Bombs in Hiroshima, where she noted that “the world will not be set free of nuclear threats by reliance on the terror of nuclear retaliation. Nor will it be set free by building tall walls around the States that now possess such weapons in the hope that they will not spread to other countries.”

Also during her trip she met with Parliamentary Vice-Minister for Foreign Affairs, Mr. Joe Nakano and other officials in Tokyo on 7 August. 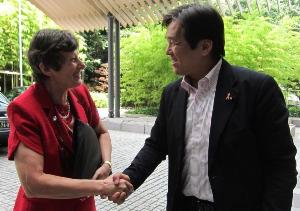 In Nagasaki on 9 August, the High Representative delivered the Secretary-General’s message at the Nagasaki peace memorial ceremony
in which he stated that “the most effective way to prevent any future use of such weapons is to eliminate them. We cannot indefinitely base international peace and security – and the future of human life on this planet – on the cynical doctrine of nuclear deterrence.”

In addition to attending the peace memorial ceremony on 9 August, Ms. Kane delivered a speech on “Public Participation in Disarmament”

at the 2012 World Conference Against Atomic and Hydrogen Bombs Rally in Nagasaki where she told participants that “None of us wants to have future generations wondering why we were unable to succeed in eliminating these horrible weapons. Instead, we want the deep satisfaction and pride that can only come from knowing that what we are doing now is in the interest of all humanity”.

While in Nagasaki on 9 August, Ms. Kane had an opportunity to meet the President of Nagasaki University and colleagues.

On 10 August in Nagasaki, Ms. Kane attended the Global Forum on Disarmament and Non-Proliferation Education organized by the Ministry of Foreign Affairs Japan and the United Nations University. At that meeting she delivered a message on behalf of the Secretary-General in which he said “I am heartened that much is being done, but I am convinced that we can do much more. Your deliberations and recommendations can be a catalyst for bringing disarmament and non-proliferation education to every school –and every student — around the world.”

The High Representative also delivered the keynote address with the title “A Race between Education and Catastrophe” Ms Kane told the audience “We are today at an important juncture. Ten years have passed since the adoption of the United Nations study on disarmament and non-proliferation education in 2002. This anniversary provides an excellent opportunity to review disarmament and non-proliferation education efforts by Member States, the United Nations, international and regional organizations as well as civil society organizations. I hope we can find ways to deepen that commitment”.