26 April 2012 — In a programme designed to assist Caribbean States combat the illicit trafficking in small arms, the United Nations Office for Disarmament Affairs (UNODA) helped the authorities in Trinidad and Tobago destroy a stockpile comprised of 16,860 rounds of illicit ammunition. 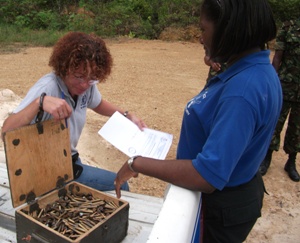 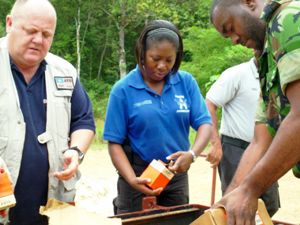 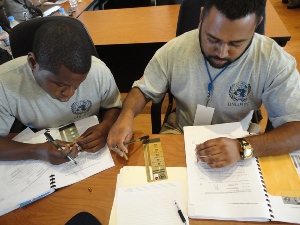 The ammunition stockpile destruction event, which took place on 26 April 2012 near Port of Spain, was an integral part of an Assistance Package Project for the Caribbean States. The assistance package was developed and implemented by UNODA’s Regional Centre for Peace, Disarmament and Development in Latin America and the Caribbean (UNLIREC). The programme focuses on strengthening national capacity and provides participants with standard operating procedures on small arms destruction. The project received generous financial support from the Governments of Canada and the United States.

Running in parallel to the stockpile destruction activity, UNLIREC also organized a regional Training Course on Combating the Illicit Trafficking in Firearms, Ammunition and Explosives. Hosted by the Government of Trinidad and Tobago, more than 50 security sector and law enforcement officers from 12 countries in the region (Antigua and Barbuda, the Bahamas, Barbados, Belize, Dominica, Grenada, Guyana, Jamaica, Saint Kitts and Nevis, Saint Lucia, Saint Vincent and the Grenadines, and Trinidad and Tobago) took part.

Participants learned interactive firearms investigation techniques, technical aspects of weapons and ammunition identification, intelligence gathering and crime-scene management, tracing and preparation of evidence in criminal proceedings, as well as practical disarmament measures such as weapons destruction and stockpile management. The course also covered cross–cutting issues related to the use of force, gender awareness and child protection.

Since 2004, UNLIREC has trained more than 3,000 law enforcement officers in Latin America and the Caribbean, strengthening the capacities of States in the region to address the problem of the proliferation of and trafficking in illicit firearms.