Working with local and international partners, the countries are alerting residents to the dangers of illegal small arms and ammunition through both targeted media blitzes and in-person education campaigns that extend from major cities out to distant villages. Meanwhile, officials are labouring behind the scenes to securely collect, record, store and ultimately destroy surrendered weapons.

The “Africa Amnesty Month” is a three-year-old African Union initiative to protect every person on the continent against the ravages of illicit small arms. Related activities are set to run through the final five months of 2020, and many countries are accepting weapons and ammunition for the effort up until the end of the year.

Declared in 2017 to fall every September, the Amnesty Month allows African citizens to voluntarily hand over all their illegally held small arms under the condition of anonymity and immunity from legal prosecution and physical harm.

The African Union’s effort to free the continent of illicit firearms is one part of its “Silencing the Guns” flagship initiative, which governments are implementing under a 2016 Roadmap.

Africa Amnesty Month is open to all African citizens. To help promote it, organizers are encouraging civil society—especially women- and youth-led groups—as well as businesses, media entities, academia, think-tanks, and religious and traditional organizations to spread the word in their communities. Seven participating countries—Burkina Faso, the Central African Republic, the Democratic Republic of the Congo, Cameroon, Côte d’Ivoire, Ethiopia and Kenya—are benefiting from the joint support of the African Union Commission, the United Nations Office for Disarmament Affairs, and the Regional Centre on Small Arms in the Great Lakes Region and the Horn of Africa, with financial backing from Germany and Japan.

Africa is home to one of the youngest populations in the world, and these young people are crucial in fostering peace and prosperity across the continent. Recognizing this fact, the African Union launched its Youth Silencing the Guns campaign in July, and African countries began organizing national youth contests to develop national campaign slogans for the Africa Amnesty Month.

Under the contest appeal “Your Voice Matters – What is your Slogan for the Africa Amnesty Month”, six countries invited youth to develop creative and captivating slogans to highlight the dangers of owning illicit weapons and encourage handovers of arms during the Amnesty Month. Two young women—from Burkina Faso and the Central African Republic, respectively—were selected as winners from roughly 200 entrants.

Describing their motivations for taking part in the contests, many contestants cited the need for strong solidarity on the continent to work together for peace; hope and certainty that a better future is possible; and the shared understanding  that arms do not offer the means to solve conflicts on the continent.

“[We] need strong solidarity on the continent to work together for peace” – Sandra Melvine, 21, science and management student at the University of Bangui and participant in the Africa Amnesty Month slogan contest.

Leaders across Africa are encouraging citizens to participate in the Amnesty Month, reflecting the strong political commitment of their States.

By participating in launch events for the Amnesty Month, the President of the Central African Republic and other senior officials bolstered national and international media coverage and outreach while giving needed visibility to national small arms commissions and personnel in related roles.

Advocating for disarmament through nationwide sensitization

In another component of the African Union’s “Silencing the Guns” flagship project, national commissions and focal points on small arms control convened local sensitization workshops with traditional leaders, women, and youth associations. Participants in these forums learned how they, as citizens, could actively participate in efforts to counter the harms of illicit small arms proliferation. Attendees could also share their experiences and grievances with national law enforcement and small arms officials.

To help familiarize the national police of participating countries with community-based policing concepts, national small arms commissions have been hosting capacity-building seminars in cooperation with national and international partners.

The “Silencing the Guns” initiative includes community-based policing because civilians—particularly those in remote areas—may arm themselves with illegal weapons and ammunition if state authorities are distrusted or absent, according to surveys conducted at project activity sites. 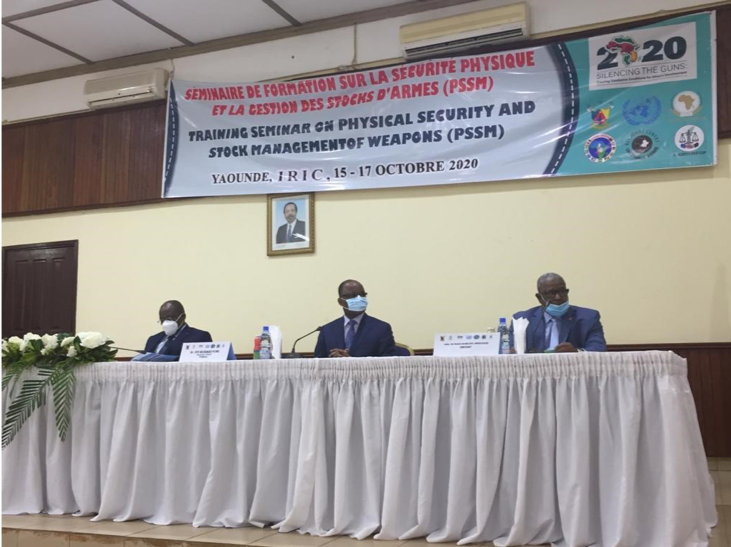 The aim of community-based policing is to support communities—the public—in a manner that is both accountable and respectful of human rights. It offers an innovative means to address community concerns beyond a narrow focus on individual crimes and incidents, while also redefining policing by linking it with civil society and local communities. It supports solutions to local safety and security concerns that are informed from within communities and adapted to local contexts—a profound shift in the way that law enforcement officers and communities think about policing.

Because knowledge of the concept still varies by country, the project workshops gave law enforcement officials a crucial opportunity to improve their understanding of local community engagement, both to improve security and to understand local conflict dynamics.

National capacities in this area varied greatly among the countries participating in the Amnesty Month. While some had long-standing small arms control commissions with established capabilities, revised legislative frameworks, and available infrastructure such as weapon marking machines and containerized armouries, others had adopted national small arms control legislation only recently. Of the States in the latter group, some lacked operational infrastructure and had yet to form a national institution or entity responsible for small arms control.

For countries still building such capacities, the project represented a stepping stone for stronger national engagement in small arms control. By helping these States to identify existing gaps and encouraging high-level political participation, the project generated awareness and triggered discussions among stakeholders about the crucial linkages between accountable small arms control, sustainable development, and peacebuilding.

Women’s participation in project activities is crucial for inclusive dialogues on security and peace through small arms control. Although small arms commissions, law enforcement services other governmental entities in some countries actively collaborated with civil society groups and pushed for strong women’s inclusion, civil society groups in other States claimed they had been sidelined.