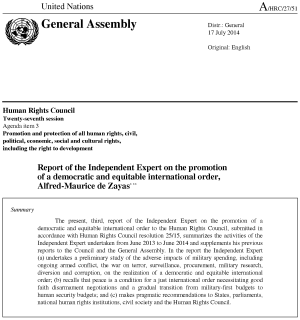 The third report of the Independent Expert on the promotion of a democratic and equitable international order, (Mr. Alfred-Maurice de Zayas of the United States) to the Human Rights Council (A/HRC/27/51 – July 2014) undertakes a preliminary study of the adverse impacts of military spending, including ongoing armed conflict, the war on terror, surveillance, procurement, military research, diversion and corruption on the realization of a democratic and equitable international order.

In the report, Mr. de Zayas recalls that peace is a condition for a just international order necessitating good faith disarmament negotiations and a gradual transition from military-first budgets to human security budgets. According to the report, such disarmament must include cessation of the production and stockpiling of weapons, particularly weapons of mass destruction, accompanied by a significant reduction in the arms trade. Mr. de Zayas notes that the Conference on Disarmament has however failed to agree on a programme of work since 1996. He adds that downsizing military budgets will enable sustainable development, the eradication of extreme poverty, the tackling of global challenges including pandemics and climate change, educating and socializing youth towards peace, cooperation and international solidarity. The report also states that a concerted effort at the conversion of military-first economies into human security economies will also generate employment and stability.

In his conclusion, Mr. de Zayas notes that “every effort must be undertaken to settle disputes through peaceful means, to prevent armed conflict and to end ongoing wars. Disarmament and demilitarization are keys to development and human security. Both must be democratically decided and implemented. This requires an enduring consciousness of the threat of nuclear annihilation, and enhanced awareness of the waste of resources. Reduced military budgets will release funds for the promotion and protection of human rights and for addressing global problems such as pandemics, climate change, deforestation and acute water shortages”.