“Toward a World Free of Nuclear Weapons” 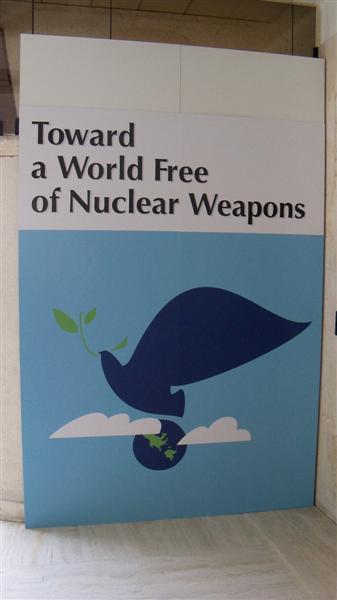 Located at the entrance to Building E of the Palais complex, the exhibition is composed of text and photographs explaining the history of nuclear weapons and what is being done to realize a nuclear-weapon-free world, artifacts from Urakami Catholic Cathedral that was near the epicenter of the atomic bomb explosion in Nagasaki, and a scaled model of the statue “Good Defeats Evil” by Georgian-Russian artist Zurab Tsereteli.

The inauguration also included a musical interlude performed by soprano Ms. Tomomi Goto; the awarding of the Nagasaki Peace Correspondent Award to Ms. Yuka Inomata, President, Friends of Hiroshima, Nagasaki and Chernobyl in Geneva; a briefing by representatives of the High School Peace Messengers of Nagasaki on their signature campaign; and closed with the ribbon-cutting ceremony of the exhibition.

Visitors to the Palais des Nations in Geneva can find the exhibition located at Door 41 of Building E on the second floor.

Photos of the Exhibit