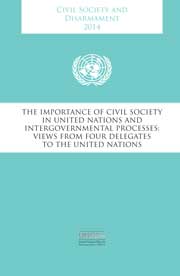 The Office for Disarmament Affairs (ODA) is pleased to announce the release the fourth annual edition of Civil Society and Disarmament. In the previous editions of this publication, the contents were either articles written by civil society representatives or statements delivered by non-governmental organizations at disarmament forums.

ODA decided to take a different approach with this edition, encouraging a select group of official delegates posted to their United Nations missions in New York to consider the ever more important role played by civil society groups in disarmament-related intergovernmental processes.

In recent years, non-governmental organizations and other members of civil society have had an ever greater impact on the international agenda. While States establish formal political positions and have the legal and legitimate authority to negotiate, sign and ratify treaties, the ability of organizations and institutions which are independent of a government (NGOs, religious groups, foundations, charities, etc.) to influence these processes is growing.

Four delegates from Australia, Costa Rica, Japan, and Mexico, and who worked at the United Nations, share their personal views on the impact civil society stakeholders have had in matters relating to disarmament and arms control.

In reading these essays, it is clear that the authors appreciated the technical expertise and knowledge, dedication, enthusiasm and impact that civil society groups bring to the disarmament debate. ODA is indebted to Ms. Maritza Chan (Costa Rica), Mr. Tomoaki Ishigaki (Japan), Mr. Rodrigo Pintado (Mexico), and Ms. Emily Street (Australia) for their personal essays. The Office is also very grateful to Dr. Denise Garcia of Northeastern University who has provided a thoughtful introduction to the publication.