As countries gear up to hold a major meeting on eliminating and preventing the spread of nuclear weapons, United Nations experts are eyeing a future where women and men have equal representation in such talks.

On 6 April, the United Nations Office for Disarmament Affairs (UNODA) and the United Nations Institute for Disarmament Research (UNIDIR) held a webinar entitled “The Tenth NPT Review Conference: Integrating Gender Perspectives Into the NPT Review Process-Towards an Equal and Secure Future.” More than 100 participants attended the online event, held in advance of the Tenth Review Conference of the Treaty on the Non-Proliferation of Nuclear Weapons(NPT).

The webinar highlighted the voices of both government and civil society representatives, all of whom share the goal of advancing gender equality in work related to disarmament and non-proliferation and in raising greater awareness about the way in which nuclear weapons affect men and women differently.

NPT States parties demonstrated their commitment to these aims when they highlighted it in three working papers and 20 statements at the treaty’s most recent Preparatory Committee meeting, held in 2019, according to Dr. Renata Dalaqua, UNIDIR Programme Lead for Gender and Disarmament and the meeting’s moderator. It is imperative, she said in opening remarks, that States keep up this momentum ahead of the Tenth NPT Review Conference, currently scheduled for August. 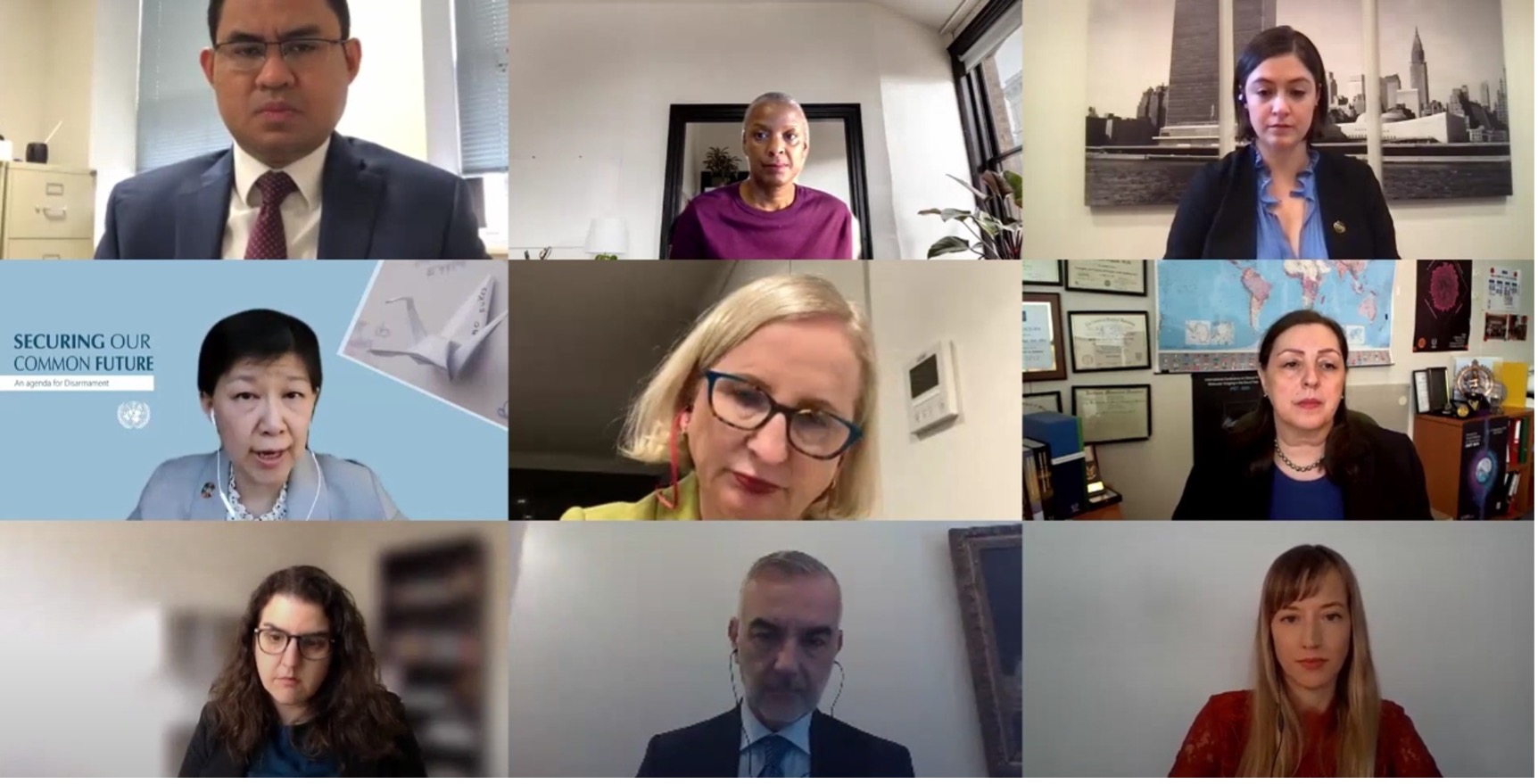 Ms. Izumi Nakamitsu, the United Nations High Representative for Disarmament Affairs, expressed optimism about the increasing focus on gender perspectives while highlighting the work still to be done.

“The NPT should be a part of efforts to transform the forces and systems that drive the systematic exclusion of women and other voices,” the High Representative said in her introductory remarks. She suggested that such a transformation could be achieved by creating inclusive cultures and supportive working environments, while also pushing to remove biases and other obstacles to women’s full and effective participation.

Ambassador Amanda Gorely, the Ambassador for Arms Control and Counter-Proliferation of the Australian Department of Foreign Affairs and Trade, explored concrete steps that States can take to increase gender equity in the field of disarmament. One important way forward, she believed, would be to shift attention to the qualitative benefits of women in policy-making, rather than focusing on gender parity solely as a quantitative matter. In closing, she highlighted the role of civil society in advancing the discussion on gender issues, including through side events at the upcoming NPT Review Conference.

Next, Michelle Dover, the Director of Programs at Ploughshares Fund, explained that applying a gender lens to disarmament matters can help set priorities by placing focus on “who is affected and who is represented”. She praised UNIDIR for its role as an important source of quantitative data about women’s participation in disarmament, nonproliferation and arms control, adding that by promoting women-led projects and placing the humanitarian impact of nuclear weapons at the centre of its work, her organization amplified marginalized voices and often-ignored issues.

Amir Hamzah Modh Nazir, First Secretary of the Permanent Mission of Malaysia to the United Nations, acknowledged that while numerous studies show disparities in the number of women in disarmament and diplomacy, he was heartened that these figures have been steadily increasing over the last four decades. States, he argued, need to ensure that they have the necessary expertise and capacities to advance the equal, full, and effective participation of women and men in disarmament. He underscored Malaysia’s efforts on this front.

Dr. May Abdel-Wahab, Director of the Division of Human Health in the Department of Nuclear Sciences and Applications at the International Atomic Energy Agency, talked about the link between gender and the peaceful uses of nuclear technology in medicine, focusing on how such medical technology contributes to diagnosing and treating breast and cervical cancer. Radiology and nuclear science are fields that could also benefit from more women leaders, she said, noting that the IAEA’s Marie Sklodowska-Curie Fellowship Programme aims to further the cause of providing women with opportunities in the peaceful use of nuclear science and technology.

In closing, Ambassador Gustavo Zlauvinen, the President-designate of the Tenth NPT Review Conference, applauded States parties for holding numerous events on gender issues in the past year, after the Review Conference was postponed due to the COVID-19 pandemic. Acknowledging that women had been underrepresented in delegations and in positions of leadership in the NPT Review Process, he called for this gap to be closed. Inclusivity in the NPT Review Process, he concluded, will bring a plurality of voices and opinions, ultimately paving the way for better and more sustainable outcomes.