The United Nations Regional Centre for Peace and Disarmament in Africa (UNREC) entered the second phase of its training programme on gender and small arms control in the Democratic Republic of Congo (DRC). Together with the small arms National Commission (CNC-ALPC), and in collaboration with the United Nations Mine Action Service in the DRC, UNREC supported the development of a gender-sensitive monitoring and reporting mechanism to track the implementation of the country’s national action plan (NAP) on small arms control and armed violence reduction.

Carefully calibrated on the DRC’s national priorities, the tool reflects the NAP’s strategic pillars and specific commitments, including  provisions on UNSCR 1325 on Women, Peace and Security. It contains a dedicated pillar on gender-sensitive actions and gender-responsive indicators, specifically designed to ensure that small arms control initiatives can adequately address the different needs of men, women, boys and girls in tackling the proliferation, trafficking and misuse of small arms. The tool includes a list of performance indicators to allow its users to measure progress towards achieving greater gender-equality and ensure that any reporting or analyses on small arms control take gender considerations into account.

The creation of the innovative policy tracking instrument is the direct result of a three-day in-person training on gender-mainstreaming small arms control that UNREC conducted at the end of last year. At the workshop, participating government officials and civil society organizations representatives put forward the recommendation to establish such a mechanism, which would contribute to closing existing gender gaps in the NAP and promoting effective coordination between those responsible for implementing the national plan. 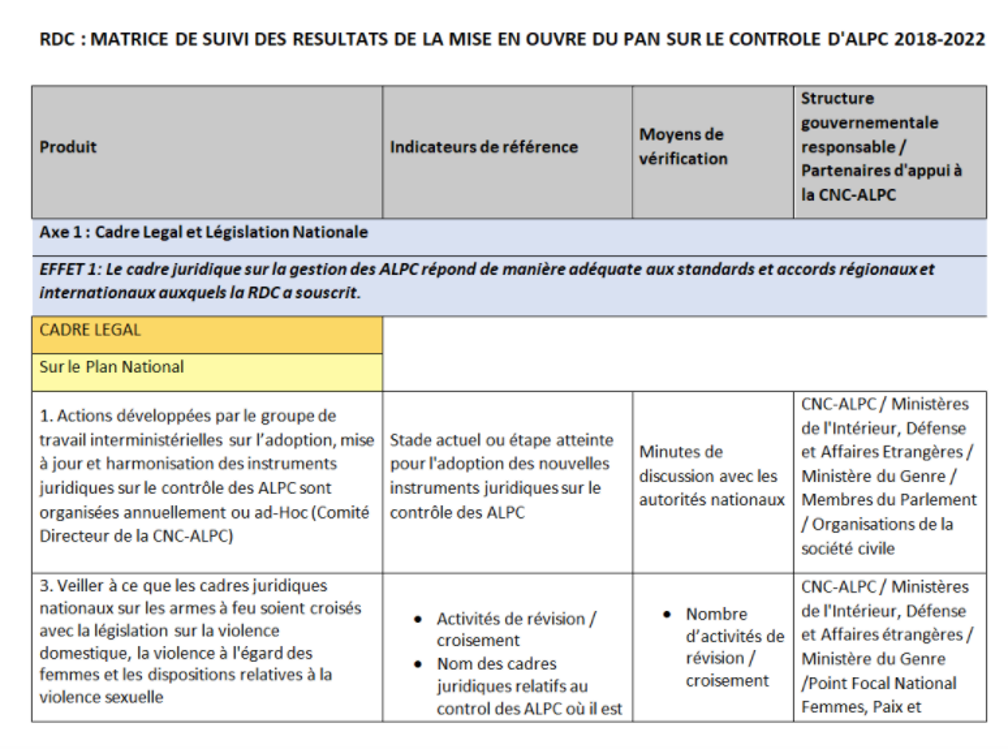 To develop the monitoring tool, UNREC partnered with various key stakeholders. UNMAS provided key technical support and coordinated with the CNC-ALPC throughout the process, while the Ministry of Gender, Family and Children and the Gender Affairs Unit of the United Nations Organization Stabilization Mission in the Democratic Republic of the Congo (MONUSCO) provided additional substantive inputs to enhance the tool and its indicators. The MOSAICmodules, a set of practical guidance based on best practices in small arms control, served as a basis for the mechanism’s monitoring methods.

The CNC-ALPC and UNMAS DRC have started to make use of the monitoring tool and expect that the information that it will generate will contribute significantly to the upcoming progress reports on the implementation of the NAP. To support effective tracking, the CNC-ALPC has set up thematic groups to begin to establish baselines and collect information on national actions and activities in the areas of small arms control legislation, operationalization, capacity building, gender dimensions, research and sensitization and monitoring and evaluation.

By systematically including gender equality elements across national policies and through gender-mainstreaming the corresponding monitoring and policy evaluation mechanisms, the national government is expected to better and more effectively apply strategies on small arms control not only for current but also for the design of future NAPs.

Figure 4 and Figure 5: UNMAS DRC meets the CNC-ALPC members to define ways to proceed with the Monitoring Tool and to plan activities for the gathering of information to priority indicators. 29 April 2021

The activities carried out by UNREC in the DRC are part of a global project in support of gender mainstreamed policies, programmes and actions in the fight against small arms trafficking and misuse, in line with the Women, Peace and Security agenda, with funding from the European Union.