On Friday 16 October the Permanent Mission of Japan hosted a side event in coordination with the Steering Committee for the International Youth Summit for Nuclear Abolition called: “Generation of Change: Encouraging Youth Action for Nuclear Abolition.” The event, chaired by Anna Ikeda of Soka Gakkai International, presented the work and outcome of the Youth Summit for Nuclear Abolition, which was held from 28 to 30 August in Hiroshima, Japan. The Summit brought together 30 youth leaders from 23 countries, to share strategies on youth participation and engagement in the push towards the elimination of nuclear weapons.

The event started off with a video capturing the highlights of the Youth Summit. The Summit included a visit to the Hiroshima Peace Memorial Museum and Park, meetings with Hibakusha (atomic bomb survivors), and discussions and networking opportunities for the youth leaders, to gain a deeper understanding on nuclear disarmament. The Summit resulted in the Youth Pledge for Nuclear Abolition , which expressed the commitment of the youth to nuclear abolition, and a one-year action planto achieve those goals.

A discussion commenced after the video with remarks by Thomas Markram, Director and Deputy to the High Representative for Disarmament Affairs. He expressed support for the youth activists and told them that although the challenges of nuclear disarmament are real, they should not be discouraged in their efforts. The younger generation has much to offer, including fresh thinking on nuclear disarmament. He underscored the importance of education, which is the best way to combat ignorance and apathy. Apathy is perhaps even more troublesome than ignorance, as it is a conscious choice to not engage. He also outlined a few educational tools offered by UNODA, which can be found on the UNODA Website.

He was followed by Vugar Allahverdiev, Programme Officer from the Office of the Secretary-General’s Envoy on Youth, who stressed the importance of developing a policy framework to include youth. The inclusion of youth in building sustainable peace is very important to the Envoy on Youth, Ahmad Alhendawi, which he also mentioned when he attended the Youth Summit in August. If young people are good enough to die on the frontline of battles, they should be good enough to sit at the same tables to negotiate on building sustainable peace.

Erin Hunt of Mines Action Canada then shared her experience with coordinating young people’s engagement in disarmament. She found that a long-term mentorship and briefings and training before conferences were key in expanding youths’ skillsets and keeping them engaged in disarmament. A big issue for young people is that they feel like they are not being taken seriously, and that it is hard for them to take part in official conferences. The Humanitarian Initiative is an exception, and young voices were heard in Oslo, Nayarit and Vienna, at the conferences on the Humanitarian Impact of Nuclear Weapons.

The final speaker was Matt de Vlieger from United for Peace and Justice. He criticized the common notion that youth are apathetic. Instead, they are frustrated that they are not heard, and not brought to the table. If representatives from official bodies at the table feel frustrated about the lack of progress, how do they think youth feel? People do not magically become leaders when they turn 50, but they grow into it. Youth must therefore be part of the discussion, so they can learn how to become the leaders of tomorrow.

The discussion was followed by a lively and engaged question and answer session with the (mostly young) audience. Big topics were the inclusion of young people worldwide in the United Nations and other international organizations, outreach at universities about nuclear disarmament, and how to make disarmament more appealing. It was a very informative event, and will hopefully lead to further engagement of the youth in nuclear disarmament. 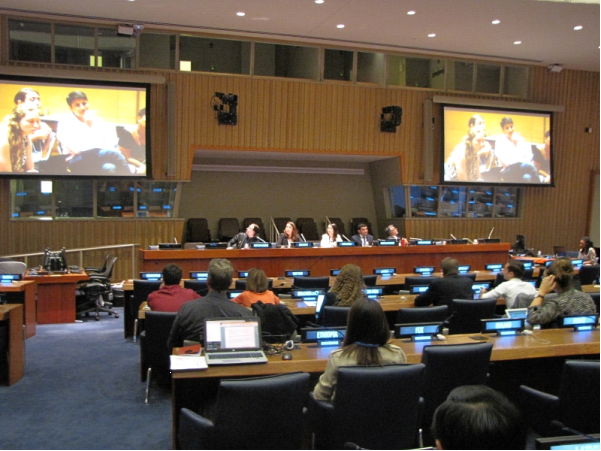 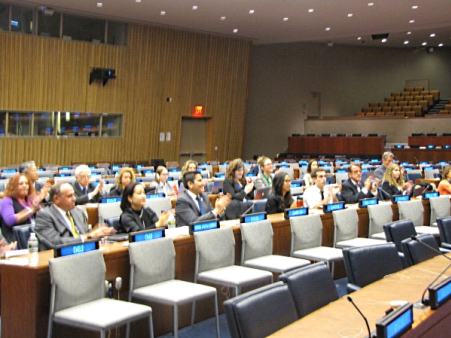