On 28 May 2021, the United Nations Regional Centre for Peace and Disarmament in Asia and the Pacific (UNRCPD) conducted an online training on national reporting on the UN Programme of Action on small arms (UN PoA) for government officials from eight Member States in Asia and the Pacific, in preparation for the upcoming Seventh Biennial Meeting of States (BMS7).

In the context of the UN Programme of Action and its International Tracing Instrument (ITI), designed to combat the illicit trade in small arms and light weapons, States have agreed to submit national reports on their implementation efforts to the United Nations every two years.

The training, which provided a detailed run through of the reporting template by UN experts, drew nearly 50 government officials from Bangladesh, Cambodia, Lao PDR, Nepal, Papua New Guinea, the Philippines, Solomon Islands and Timor-Leste – all countries that are yet to submit their national report for the implementation period 2018-2019.

Government officials from eight countries in Asia-Pacific joined UN experts for an online training on national reporting on the UN Programme of Action (UN PoA) in preparation for the Seventh Biennial Meeting of States (BMS7).

States’ national reports on the implementation of the UN PoA and its ITI make it possible to analyse the trends, challenges and opportunities related to their operationalization. The UN Office for Disarmament Affairs (ODA) will present the global data at the forthcoming Seventh Biennial Meetings of States (BMS7), scheduled to take place from 26 to 30 July 2021. At BMS7, States will take stock of the national, regional and global implementation of both international instruments.

Mr. Takashi Mashiko, Programme Officer at ODA’s Conventional Arms Branch, started the meeting by presenting the first three sections of the reporting template, pertaining respectively to national coordination infrastructure, small arms manufacture and international transfers. National reports, he said, encourage transparency and information exchange by States, and build national capacity with respect to data collection, reporting, measurement, and analysis. He then laid out the preliminary findings of the current implementation trends, based on the information that is currently available. 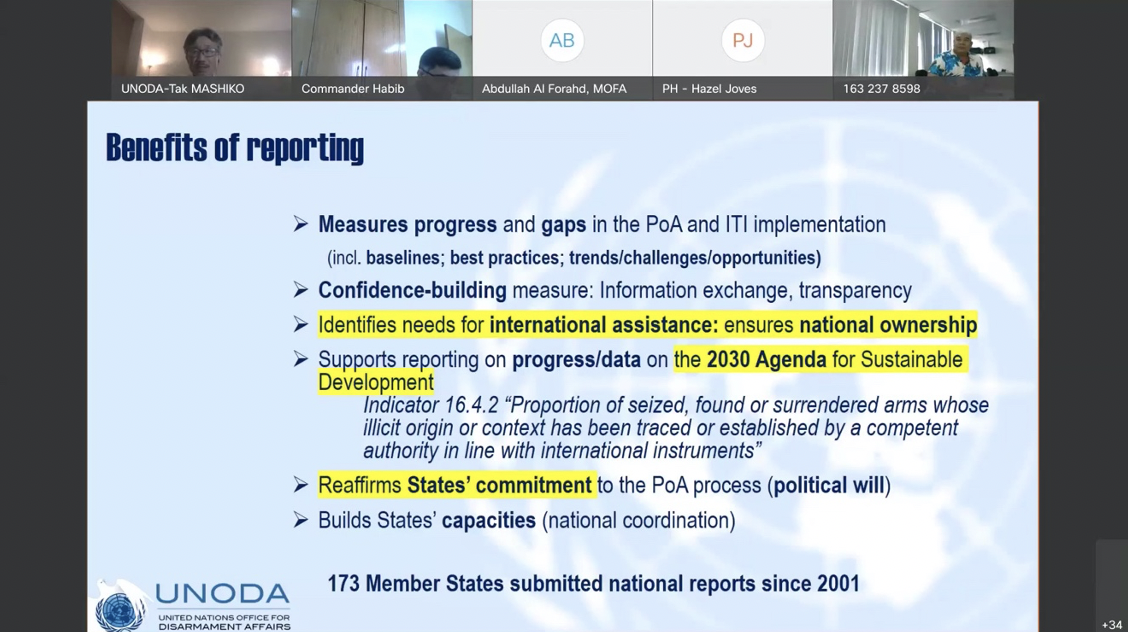 Next, UNRCPD’s Director Mr. Yuriy Kryvonos zoomed in on a number of substantive sections of the reporting template. Breaking down the questions related to brokering, stockpile management, collection, and marking and record-keeping, Mr. Kryvonos outlined best practices and standard procedures in these areas, referencing the Modular Small-Arms-Control Implementation Compendium (MOSAIC). 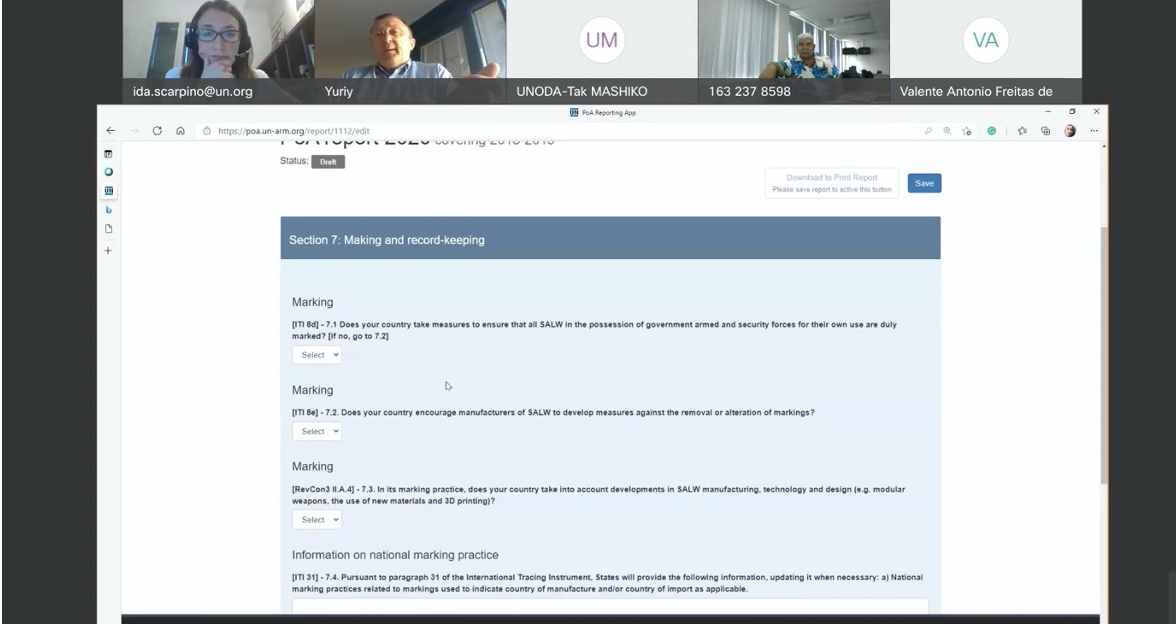 Mr. Yuriy Kryvonos, Director of UNRCPD, guided the participants through section 7 of the reporting template: Marking and record-keeping.

Ms. Ida Scarpino, Regional Project Coordinator on Gender & Small Arms and Light Weapons at UNRCPD, then presented the sections related to international tracing, international cooperation and assistance, and gender and additional information. She explained that the data that States collect and then report under the section on International Tracing is highly relevant for achieving Sustainable Development Goal 16, most notably indicator 16.4.2, which focusses on weapons tracing. Going through the reporting template’s gender indicators, Ms. Scarpino illustrated with concrete examples how sex-and-age disaggregated data contribute to more effective small arms control policies. 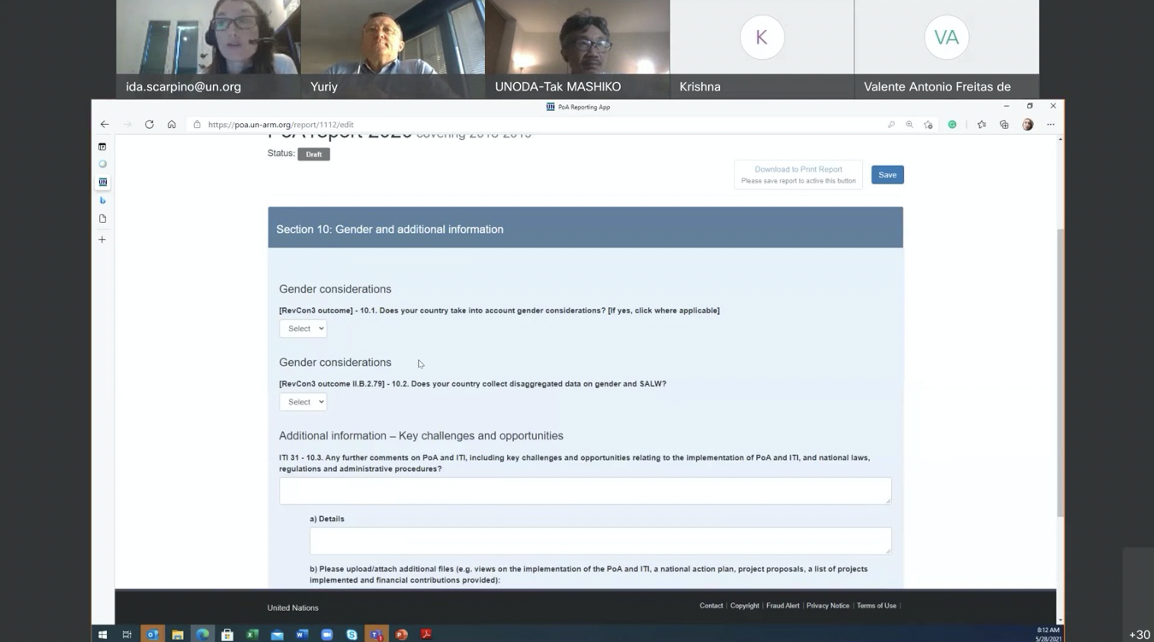 The training was organized in the framework of the Office for Disarmament Affairs’ global project on gender and small arms and light weapons, funded by the European Union (EU), which supports the commitments that States have made under the UN PoA and the preparatory work for BMS7. A video recording of the training is available here.