17 April 2012 — As part of 140 events in 41 countries worldwide, an event in the framework of the 2nd Global Day of Action on Military Spending, coordinated by the United Nations Office in Geneva, the International Peace Bureau (Geneva) and the UN Institute for Disarmament Research, was held in Palais des Nations on 17 April 2012 with support from the UN Office for Disarmament Affairs. Representatives from permanent missions, NGOs and Geneva-based institutions assembled in the Council Chamber to discuss whether towering military budgets lead us to a safer, more stable world.

In his address at the event in Geneva, the Director-General of UNOG Mr. Kassym-Jomart Tokayev, referred to the latest United Nations Report on Military Expenditures, according to which 66 Member States spent USD 1.22 trillion in the fiscal year 2010. He also underlined that “disarmament should be properly placed in the context of broader efforts aimed at creating conditions conducive to conflict prevention and to long-term development.” 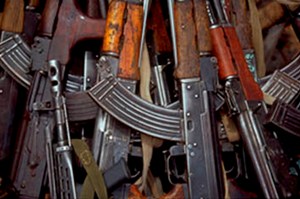 Ms. Helen Wilandh from the Stockholm International Peace Research Institute (SIPRI), also presented data on military spending at the event. Analysis, by both the UN and SIPRI, points to a certain slowdown in the growth and even reduction of military spending, particularly in North America and Western and Central Europe.

The issue of promoting disarmament and achieving sustainable development is high on the UN agenda. Preliminary estimates by the World Bank indicate that the Millennium Development Goals (MDG) target of cutting by half the proportion of people living in extreme poverty was achieved in 2010. In addition, the number of people living in extreme poverty has declined in all regions of the world.

Discussion of the nexus between disarmament and development is not new. The issue of balance between military spending and development is embodied in Article 26 of the UN Charter, which calls for the least diversion for armaments of the world’s human and economic resources.

The World Bank reported in 2011, no low-income, fragile or conflict-affected country has achieved a single MDG. Different types of conflict, crime, systemic violence and the threat of terrorism constitute some of the biggest obstacles for development and a challenge for efforts to promote disarmament.

In countries and regions affected by protracted violence, often fuelled by the illicit trade in small arms and light weapons, poverty rates are higher, children are twice as likely to be undernourished and three times as likely not to attend primary school.