Variety of small arms and light weapons surrendered during the Disarmament of Illegal Armed Groups Programme in Kabul, Afghanistan in 2008

The UN Charter does not forbid its Member States to own and use conventional arms when this is done in conformity with international law. This is the reason why the terms “arms control” and “arms limitations” are more often used than “disarmament” when referring to conventional arms.

Some conventional weapons, however, may cause humanitarian concern either because of the way they are used or may be used, or because of their design which makes them incompatible with international humanitarian law. Early efforts to address such concerns were made already in the 19th century. A more recent example of legally binding regulations and limitations in the use of conventional weapons is the 1980 Convention on Prohibitions or Restrictions on the Use of Certain Conventional Weapons Which May Be Deemed to Be Excessively Injurious or to Have Indiscriminate Effects and its protocols, which cover the following: non-detectable fragments; mines, booby-traps and other devices; incendiary weapons; blinding laser weapons and explosive remnants of war.

Some conventional arms, such as anti-personnel landmines or cluster munitions, are inherently indiscriminate and cause unacceptable humanitarian harm. For these reasons States have agreed on their total ban and elimination, as in the case of the 1997 Convention on the Prohibition of the Use, Stockpiling, Production and Transfer of Anti-Personnel Mines and on Their Destruction and the 2008 Convention on Cluster Munitions. Efforts to regulate adequately other conventional arms issues such as explosive weapons in populated areas (EWIPA), improvised explosive devices (IEDs) as well as ammunition, are being considered in several multilateral fora, including the UN General Assembly. UNODA continues to support Member States in their efforts to address these issues.

Global regulatory frameworks for trade and usage of conventional weapons are relatively recent and include:

Programme of Action to prevent, combat and eradicate the illicit trade in small arms and light weapons in all its aspects

International Tracing Instrument to enable states to identify and trace, in a timely and reliable manner, illicit small arms and light weapons

The UN Protocol against the Illicit Manufacturing of and Trafficking in Firearms, their Parts and Components and Ammunition

Visit UNODA Meetings Place for information on PoA related and other disarmament meetings and events.

Transparency in armament is also a regulatory measure to promote confidence and diminish incidents of tension among States. In this connection, two global instruments for which UNODA maintains electronic public databases exist: 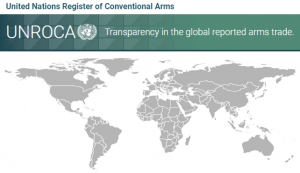 The UN Register of 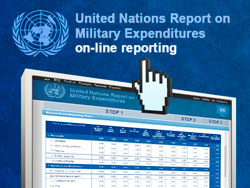 Addressing the issue of military spending is important not just in the context of building trust to de-escalate crises and conflicts but also in establishing a balance between such spending and the equitable allocation of resources to other areas of socio-economic development.

Following the adoption in 2015 of the 2030 Agenda for Sustainable Development which includes Target 16.4. for the significant reduction of illicit flows of arms by 2030, UNODA, together with the United Nations Office on Drugs and Crime (UNODC) have been serving as custodian agencies for this target and its indicator.

Gender mainstreaming in conventional arms control is a cross-cutting within the ODA-wide action on gender. Through extrabudgetary resources, the UNODA Conventional Arms branch supports States in building the capacities of national officials for the effective integration of gender dimensions into small arms and ammunition control policies and programmes.