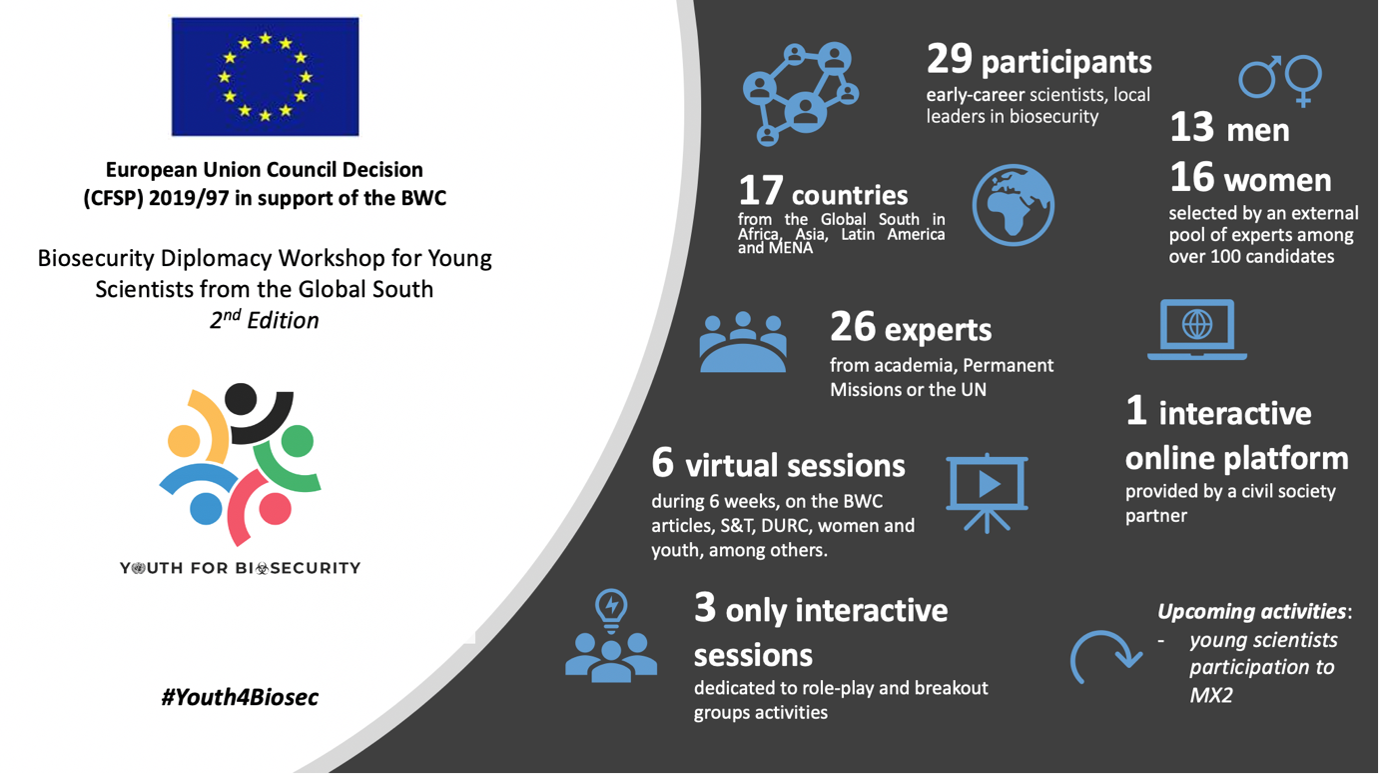 As the world grapples with COVID-19 for a second year, the United Nations Office for Disarmament Affairs and the Biological Weapons Convention Implementation Support Unit (ISU) are also pushing to bolster global capacities against the misuse of biological agents .

Informing young scientists about their critical role  in biosafety and biosecurity  was the chief aim of the second Biosecurity Diplomacy Workshop for Young Scientists from the Global South, an interactive training programme launched in January by UNODA and the Biological Weapons Convention ISU.

The “#Youth4Biosec” workshop brought together 29 young scientists from the Global South, including 16 women, to participate in two months of expert discussions and role-play exercises. Centred around the framework of the Biological Weapons Convention (BWC), the programme enabled scientists to share knowledge and ideas about biosecurity and how to strengthen it, including at the local level.

The participants considered multilateral disarmament diplomacy and ways to enhance and promote biosecurity, advancing the UN Secretary-General’s vision of youth as the “ultimate force for change” in disarmament. The programme’s areas of focus included responsible innovation in science and technology, ways to strengthen regional biosecurity networks in the Global South, and international cooperation in the peaceful uses of biology.

The programme was made possible by generous support offered by the European Union under its Council Decision 2019/97/CFSP, adopted in support of the BWC. The young scientists taking part were from 17 countries in the Global South: Argentina, Benin, Brazil, Chile, Colombia, Ethiopia, India, Malaysia, Morocco, Nepal, Nigeria, Pakistan, Philippines, Rwanda, South Africa, Tunisia and Venezuela.

Ambassador Walter Stevens, Head of the Delegation of the European Union to the United Nations in Geneva, delivers remarks to workshop participants on 22 January 2021.

Welcoming the group at the programme’s launch on 22 January, Ambassador Walter Stevens, Head of the Delegation of the European Union to the United Nations in Geneva, underlined the participants’ important role in tackling emerging threats.

Over the following weeks, the young scientists heard from dozens of expert speakers, including from the Nuclear Threat Initiative, the International Genetically Engineered Machine Foundation, the United Nations Institute for Disarmament Research and the International Federation of Biosafety Associations (IFBA). The group also met virtually with the UN Youth Champions for Disarmament, a unique part of the award-winning #Youth4Disarmament initiative, to exchange ideas about how young people can be a force for positive change in building a more peaceful and secure world.

Taking full advantage of the workshop’s virtual platform, the participants interacted with prominent scholars on topics such as science diplomacy, dual-use research of concern, ethical science and innovation, and global health security. They also actively shared their own knowledge about biosafety and biosecurity at the domestic, regional, and international levels, as well as ideas to strengthen cross-regional cooperation under the BWC. Additionally, the young scientists presented their own research and networked with colleagues who attended the first workshop in 2019.

After each session of the workshop, the young scientists could continue their discussions on the International Federation of Biosafety Associations’ newly launched social platform, designed to provide groundwork for creating a sustainable biosecurity network in the Global South.

As they concluded the programme in March, participants felt empowered and motivated to promote sustainable change in their professional communities, in line with the BWC’s objectives. The group will continue to pursue a range of tailored activities; for example, its members will follow the virtual proceedings of a September BWC Meeting of Experts (MX2) if the format allows. 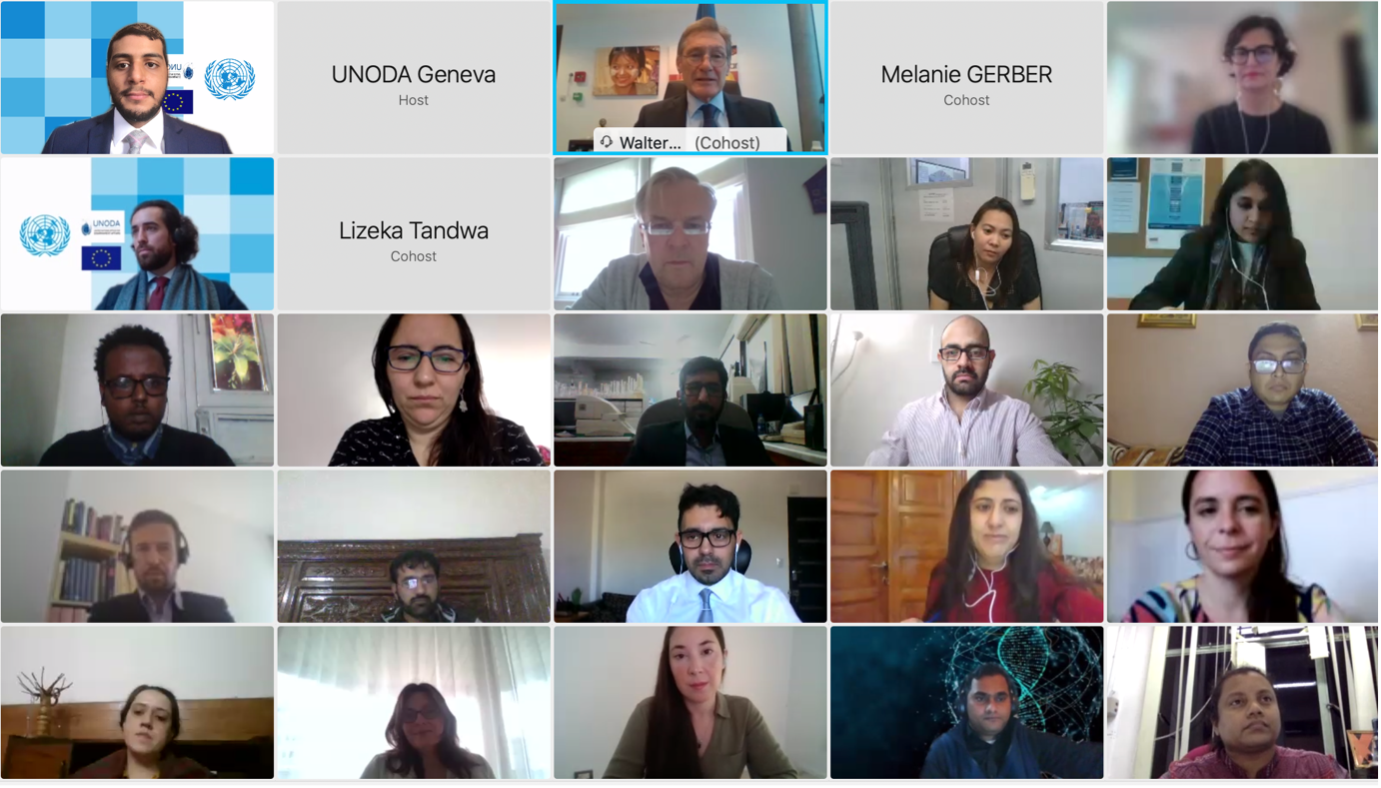 Snapshot of participants on 22 January 2021.