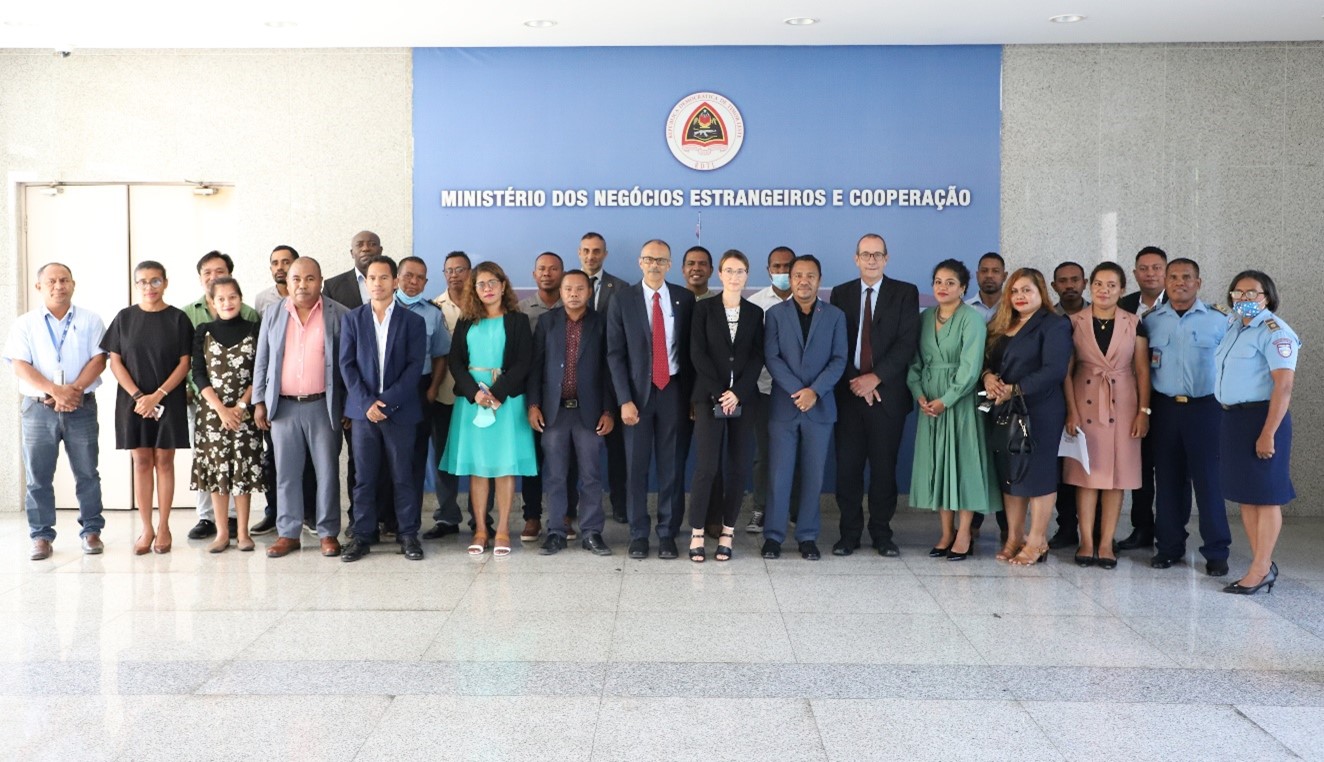 Forty-two participants (17 women, 25 men) gathered at the Institute of the Diplomatic Training Center, Ministry of Foreign Affairs and Cooperation (MoFAC) of Timor-Leste, Dili, for the opening ceremony of the in-country training programme on gendemainstreaming small arms control.

The opening ceremony of the three-day training saw the participation of the Acting Director of UNRCPD, Ms. Soo Hyun Kim, the Director General for Multilateral and Regional Affairs, Ministy of Foreign Affairs and Cooperation (MoFAC) of Timor-Leste, Mr. Licinio Branco, the Ambassador of the European Union Delegation to Timor- Leste, Mr. Andrew Jacobs, the United Nations Resident Coordinator, Mr. Roy Trivedi, and the Head of Office of UN Women, Ms. Amy Nishtha Satyam. All speakers highlighted the timely nature of the training and the relevance of its topics to global, regional and national security challenges, underscoring the need to translate global agendas, UN resolutions and programmes into practice – such as Women, Peace and Security, the UN Programme of Action to Prevent, Combat and Eradicate the Illicit Trade in Small Arms and Light Weapons (PoA) and the 2030 Agenda for Sustainable Development –. 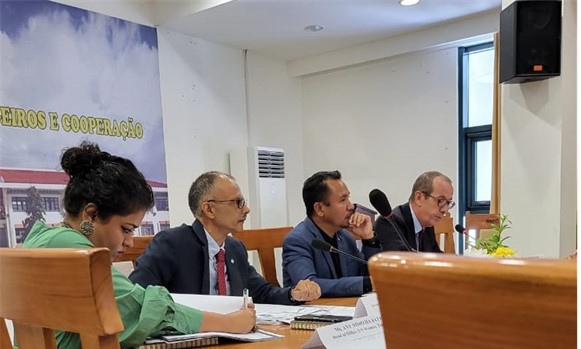 The training saw the participation of key ministries and governmental agencies, national police, customs and civil society. On Day One, through presentations, exercises and focused discussion jointly facilitated by UNRCPD with the support of the United Nations Institute for Training and Research (UNITAR), participants discussed and acquired knowledge on key concepts and definitions on Gender & SALW control, the importance of gender analysis and data collection in SALW context and the linkages between gender based violence, toxic masculinity and misuse of SALW. “Take gender norms seriously when developing and implementing small arms control and disarmament policies. Gender dynamics can affect the likelihood of being targeted by armed violence or being the perpetrator, and the ability to access medical and psychological assistance’, said Ms. Ishita Kaul, Spotlight Initiatives Programme Manager, UN Women, while explaining the root causes of gender-based violence (GBV) in Timor-Leste and the role of small arms as enabler of such violence. 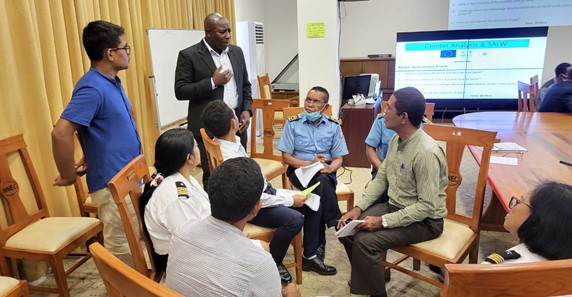 Colonel William Nortey, UNITAR trainer, facilitating the group discussion on available data on small arms and light weapons and gender issues in Timor-Leste, and how these data can be cross analyzed. 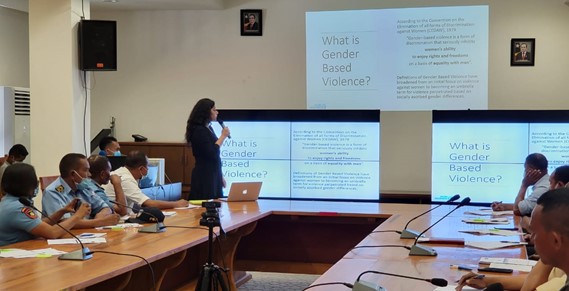 Day Two focused on the normative framework on SALW control and synergies with global agendas, with the participation of a number of speakers from the government. After a kick-off presentation and mapping exercises on global instruments relevant to small arms control, sustainable development and Women, Peace and Security, government officials elucidated the relevant frameworks in Timor-Leste and gaps and opportunities with their implementation. Among them, Ms. Maria Filomena, Director for the State Secretariat for Equality and Inclusion, responsible for the implementation of the National Action Plan on the Prevention of Gender Based Violence;  Superintendent Mr. Ismael Da Costa Babo, Director General, Civil Protection, Ministry of Interior, supervising the drafting process of the second National Action Plan (NAP) on UN Security Council Resolution 1325, on Women, Peace and Security; Ms. Fatima Jesus Martins the Head of the Gender Section of the National Police (PNTL). Ms Martins provided an overview of small arms control policies and normative frameworks at the national level, as well as the gender strategy of the PNTL. Next, Ms. Flora Wai Chan, International Consultant on WPS at UN Women, and Ms. Ida Scarpino, Regional Project Coordinator for Gender and SALW control at UNRCPD led a concluding discussion on converging agendas and entry points for their synchronization, with a focus on the overlapping objectives between the UN Programme of Action and the WPS agenda. 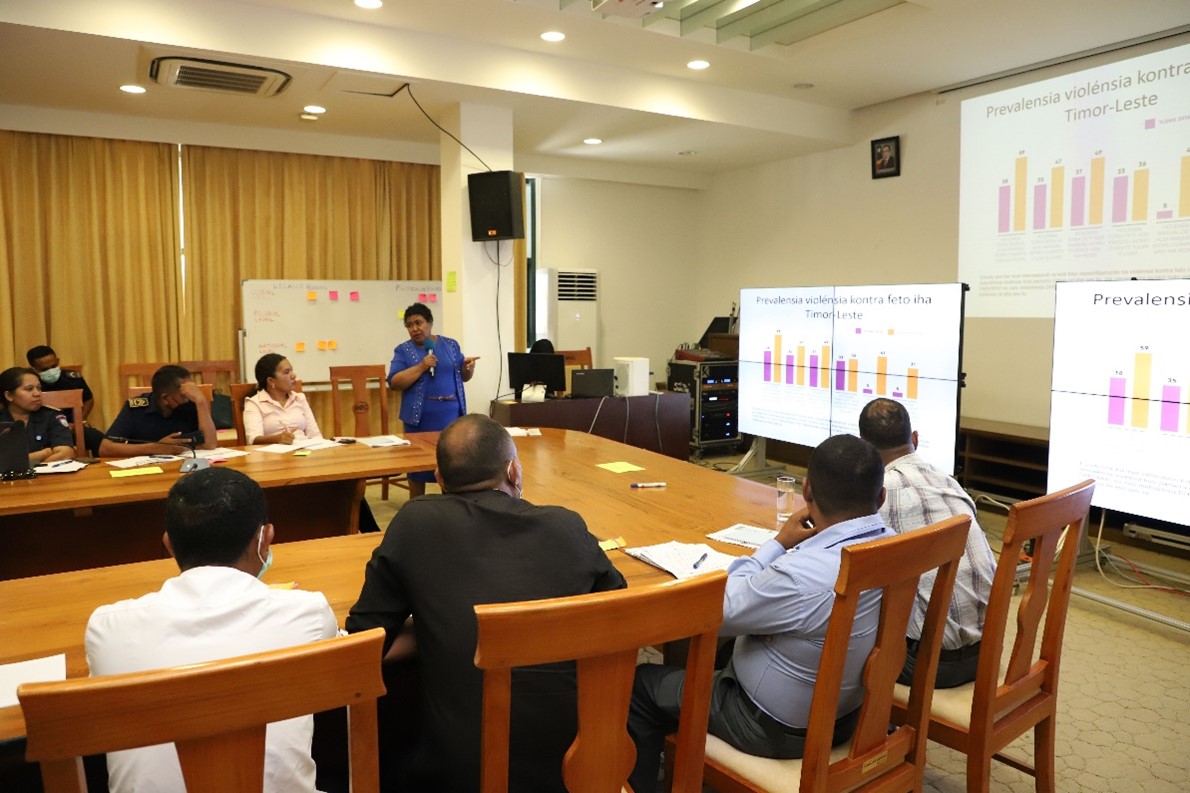 Ms. Maria Filomena, Director for the State Secretariat for Equality and Inclusion, presented on the results and the way forward of the 2017-2021 National Action Plan (NAP) on Gender Based Violence prevention. 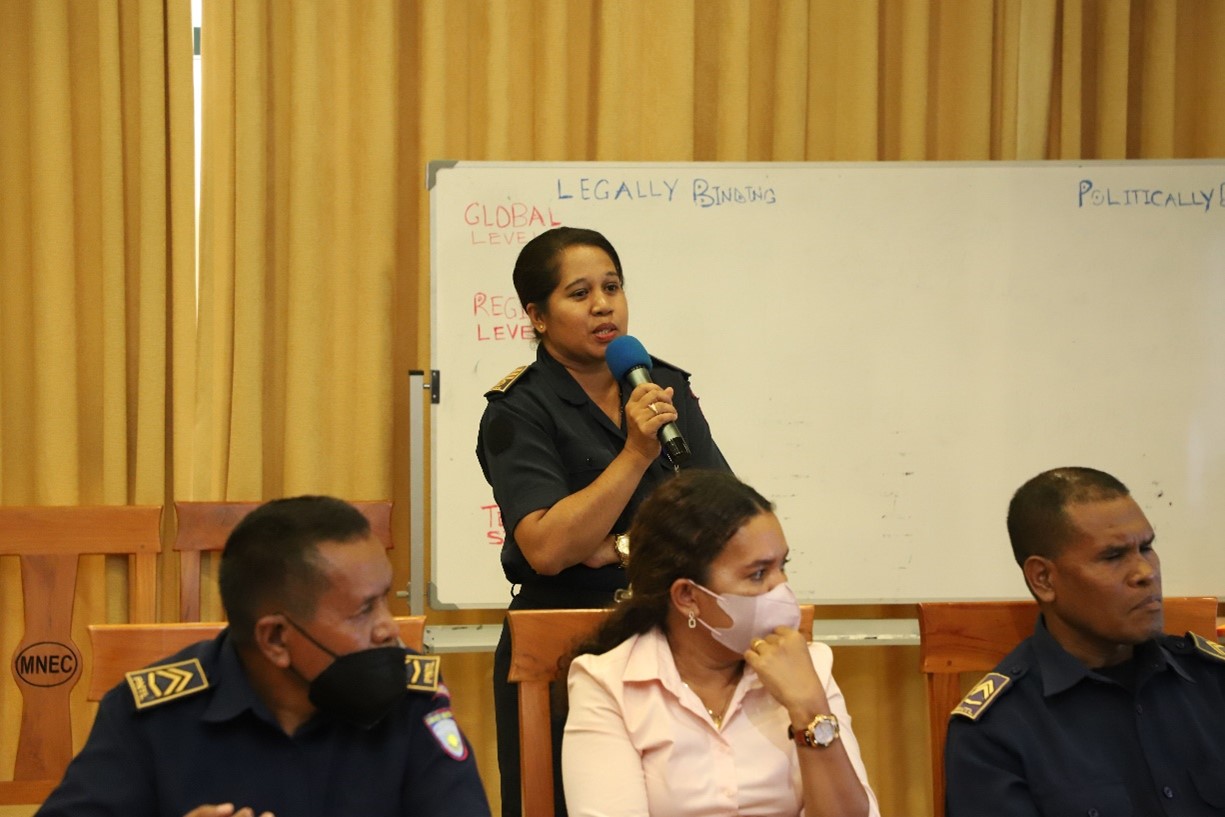 Ms. Fatima Jesus Martins, the Head of the Gender Section of the National Police (PNTL), presenting the national laws relevant to small arms control and synergy with the UN Programme of Action. 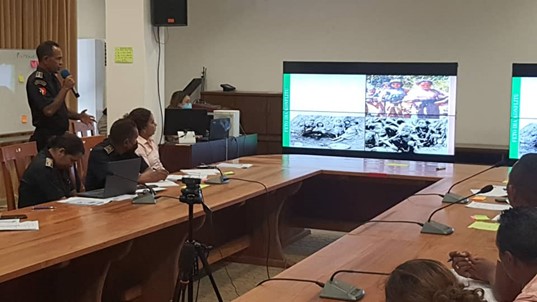 Day three focused on women’s participation in small arms control and civic engagement. In this regard, the Head of the Gender Unit of the National Police provided data about women’s participation in the police and the current gender strategy. Next, UNRCPD and UNITAR presented on gender responsive small arms control and explained how gender analysis and gender equality are applicable and beneficial to the full lifecycle of SALW. Finally, a panel composed of two representatives of the civil society and a representative from the Ministry of Education led a discussion on gender transformative approaches and civic engagement for gun violence prevention. “Women’s engagement and women’s empowerment in arms control is a tool and a strategy to challenge the gender norms underlying inequalities, violence and the misuse and possession of SALW’, said Ms. Domingas Amaral, of the civil society organization (CSO) Fokupers.

The training concluded with a wrapping exercise aimed at summarizing the key messages from the three-day sessions and drafting a series of action points to take gender mainstreaming small arms control forward in Timor-Leste. 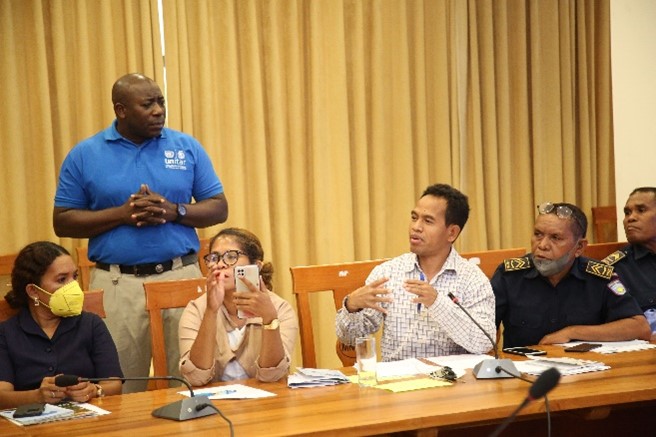 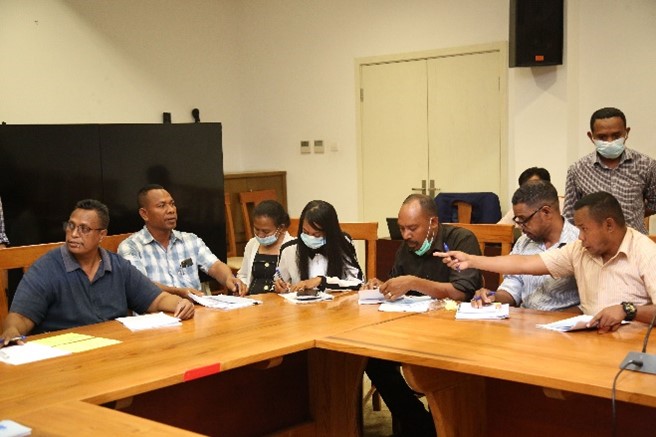 Participants worked in small groups to draft a series of recommendations to integrate gender in small arms control at the policy, legislation and operational level, and to promote the harmonization of relevant frameworks and national strategy.

The three-day training was followed by a one-day workshop on National Coordination Mechanism and National Action Plan on SALW control, held on 16 May. The workshop, based on the Modular Small-arms-control Implementation Compendium (MOSAIC), consisted of two main exercises, aimed to draft respectively the Term of Reference of a National Coordination Mechanism and a National Action Plan on SALW control in Timor-Leste. Both exercised included the actions points previously identified in the three-day training and drew on the recommendations of the previous UNRCPD’s Technical and Legal Assistance on the PoA implementation conducted in Timor-Leste from 2019-2020, which were presented by Ms. Elli Kytomaki, Research Associate at UNRCPD. 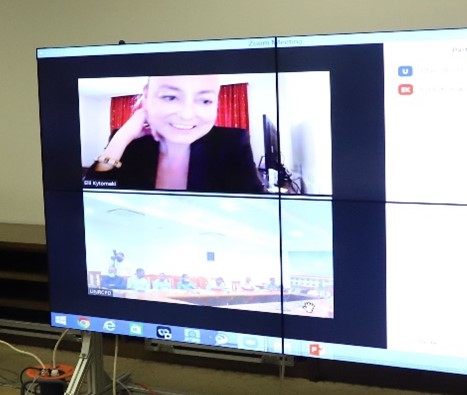 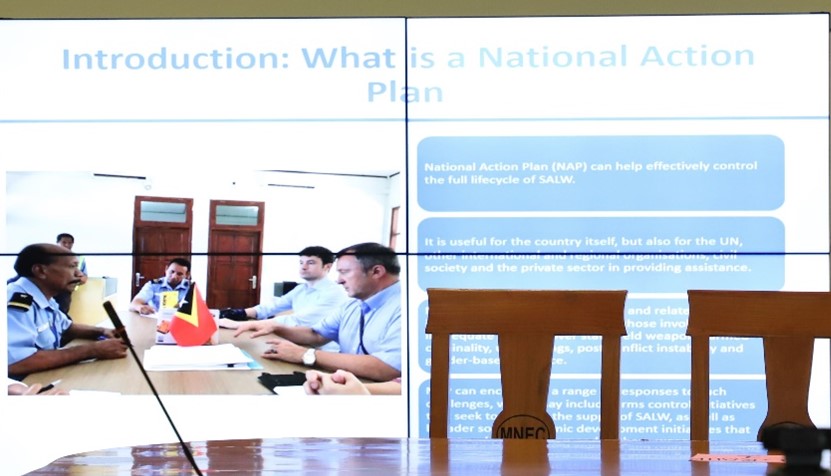 Ms. Elli Kytomaki, Research Associate at UNRCPD, connected virtually from Kathmandu to provide an introduction of the MOSAIC module on National Action Plan and the recommendations of the UNRCPD’s Technical and Legal Assistance on the PoA implementation in Timor-Leste, in which she took part in the capacity as legal expert. 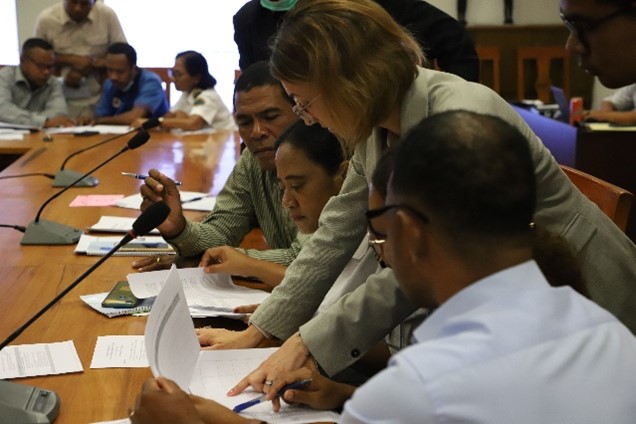 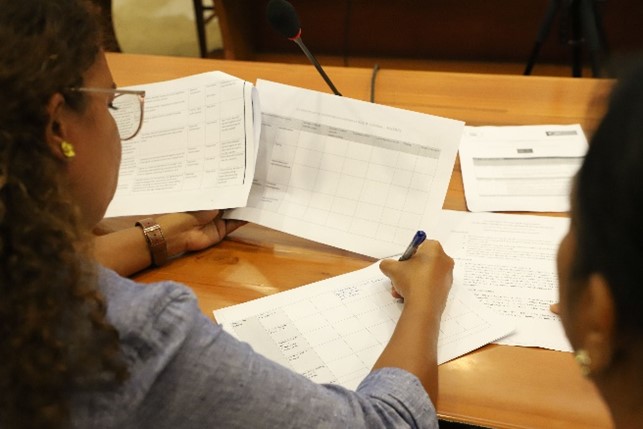 Participants working in small groups on the draft of a National Action Plan on SALW control. 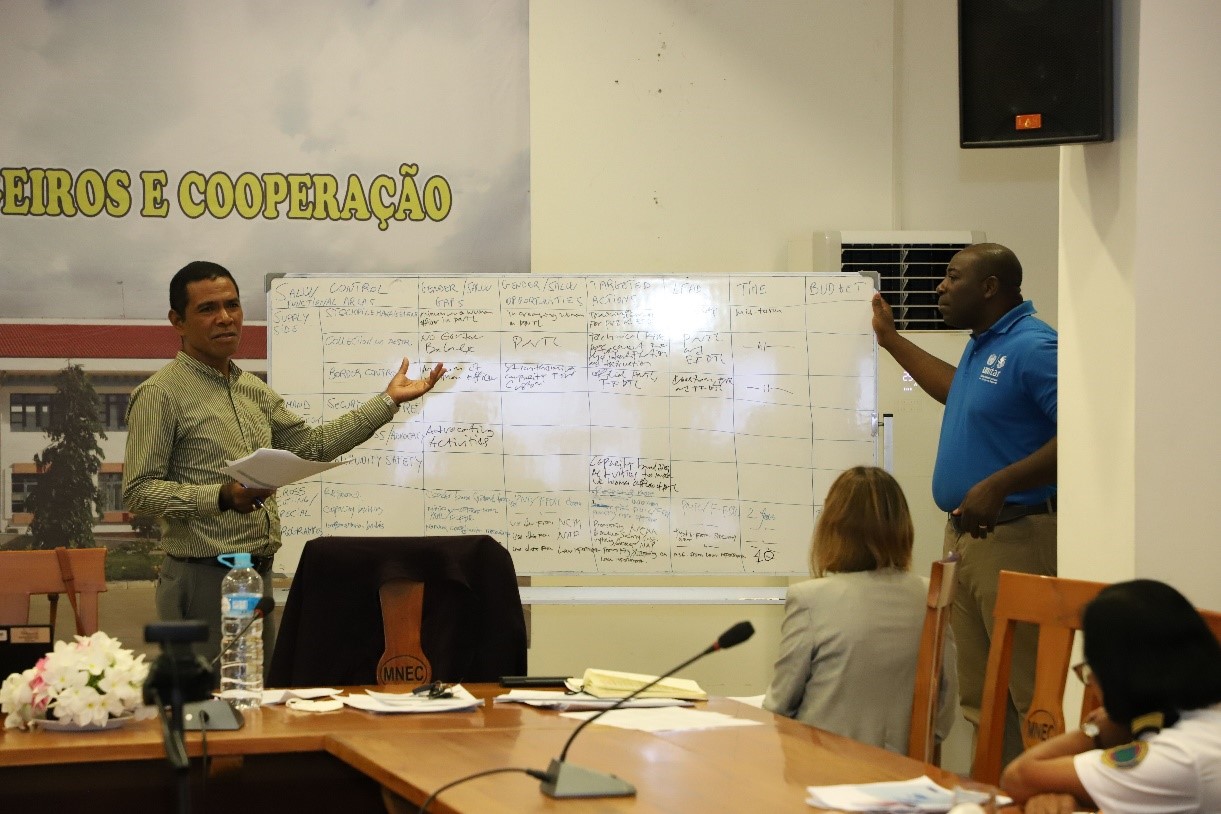 Working groups presenting in plenary the results of their discussion and drafting exercise. All inputs were consolidated in one single matrix which will serve as the draft NAP scheme for future work in consolidating a national coordination infrastructure on SALW control in Timor-Leste.

During the visit in Dili, UNRCPD also held two meetings at the UN house, hosted by the UN Resident Coordinator. The first one was with the representatives of twenty-three CSOs; the second one with the UN Country Team. In both meetings UNRCPD discussed with stakeholders and potential partners avenues for closer collaboration on gender responsive small arms control in Timor-Leste.

UNRCPD meeting twenty-three representatives of the CSOs in Timor-Leste and the UN Country Team.