“They looked as if they were ghosts”: An atomic bomb survivor shares her memories – UNODA

The United Nations Office for Disarmament Affairs (UNODA) and its #Youth4Disarmament initiative joined the non-governmental organization Peace Boat, which is part of ICAN’s International Steering Group, in December for a discussion with Ms. Michiko Hattori, a survivor of the atomic bombing of Hiroshima.

More than 80 people attended the online event entitled “Every Second Counts for the Survivors! – Peace Boat Hibakusha Project Online”. Its aim was to raise awareness both about the humanitarian impacts of nuclear weapons and the importance of creating a nuclear-free future for all, as well as generations to come.

Ms. Emilie McGlone, Director of Peace Boat US, said in opening remarks that the world continued to face the threat of nuclear weapons despite 75 years of calls for their total abolition by the hibakusha, including many survivors of the atomic bombings of Hiroshima and Nagasaki in August 1945.

Ms. McGlone also introduced Peace Boat’s Hibakusha Project, which had brought over 170 hibakusha to 100 cities in more than 60 countries since 2008. It was important, she said, to create opportunities for people around the world to listen to the hibakusha while it was still possible. Ms. McGlone concluded her introduction by welcoming young people’s leadership in pursuing nuclear disarmament.

Ms. Rika Watanabe then discussed Peace Boat’s Global Voyages, highlighting their goal to raise awareness about the inhumanity of nuclear weapons by communicating and conveying the voices of the hibakusha to people all around the world. She also outlined the organization’s work with “global hibakusha”, such as the survivors of nuclear testing in Australia and individuals affected by the 2011 Fukushima Power Plant explosion in Japan. She added that Peace Boat’s efforts were centred on connecting and fostering solidarity between all global hibakusha.

Mr. René Holbach, UNODA Programme Management Officer, stressed that the words of the hibakusha, and all survivors of nuclear explosions and tests, were among the most powerful forces moving us closer to a world without nuclear weapons. “By sharing their experiences, these survivors have deeply touched generations of people, reminding both diplomats and the rest of us that nuclear arms pose an existential threat to humanity,” he added. He also emphasized the role of young people as powerful forces for change and highlighted the work of UNODA’s #Youth4Disarmament initiative in empowering youth to pursue the widely held desire to rid the world of nuclear weapons. To conclude, Mr. Holbach noted a pledge by both the United Nations Secretary-General and the High Representative for Disarmament Affairs to carry forward the hibakusha’s testimonies.

Next, Ms. Michiko Hattori shared her experience of the atomic bombing of Hiroshima on 6 August 1945, when she was a 16-year-old military nurse. Speaking in Japanese with an English-language interpreter, Ms. Hattori said she was exposed to the atomic bombing and lost consciousness 3.5 km away from the explosion’s hypocentre. She recalled seeing a very bright flash of light and hearing a thunderous sound before losing consciousness. 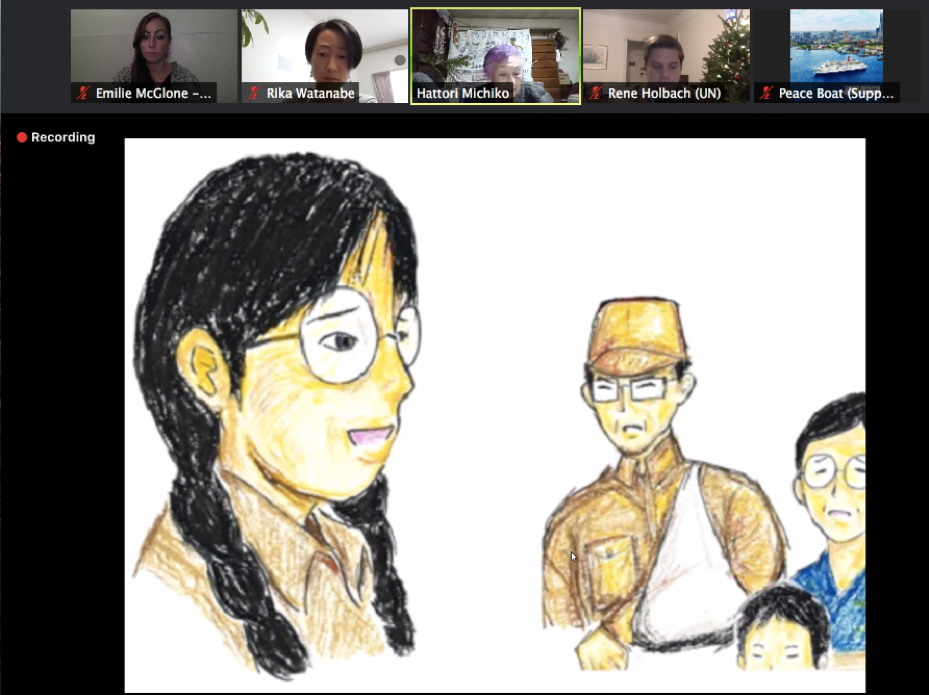 Shaken awake by a Japanese soldier, she witnessed crowds of people as they made their way to medical facilities through the burning city. Their hair stood on its ends, she said, and their burnt clothes and skin peeled from their bodies. “They looked as if they were ghosts”, she added.

Ms. Hattori said she would never forget two things from that day. The first was a younger boy, his body entirely burnt, asking her if his father would be able to find him. He died before Ms. Hattori could treat his wounds. Her second memory was of a mother seeking assistance to save her child. When Ms. Hattori informed the mother that her child had already died, the mother screamed, collapsed and immediately passed away. “Even now, when I close my eyes, I can see that young boy and young mother.”

Ms. Hattori noted that she felt a sense of responsibility to share her story to help the world understand the horrifying reality of nuclear weapons. “I think that if everyone were to learn about the war, to understand what happened, and to imagine themselves in the shoes of the hibakusha, I truly believe that this will lead to peace”, she said.

“I experienced the terror and the hell that the bomb caused, and as a hibakusha I have a message to the people of the world.” she added. “In order to achieve a world in which we can all live in safety, we need to work together to realize a world free of nuclear weapons.”

In a question-and-answer session moderated by #Youth4Disarmament representative Su-Yin Lew, audience members asked Ms. Hattori about a variety of different topics, including: how she would commemorate the entry into force of the Treaty on the Prohibition of Nuclear Weapons (TPNW) on 22 January 2021; how youth could support the hibakusha and amplify their messages; what health issues she had suffered as a result of the radiation of the atomic bombing; what medical impacts the bomb had on women; how the COVID-19 pandemic had impacted Peace Boat’s work; and what continued to inspire Ms. Hattori.

Ms. Ankita Seghal, a youth representative for Peace Boat, then led an origami workshop inspired by the late Sadako Sasaki. As a young girl in the 1950s, Ms. Sasaki attempted to fold 1,000 paper cranes based on a Japanese legend suggesting that doing so might cure her of the leukaemia she had developed as a result of the Hiroshima bombing. Sadly, Ms. Sasaki died at the age of 12, despite folding hundreds of the origami cranes.

“Today, the world remembers and honours Sadako through her legacy, her paper cranes,” Ms. Seghal said. She then taught participants how to make their own origami cranes.

As the event concluded, Ms. Hattori joined fellow speakers and the event’s participants in a group photo with their newly assembled paper cranes.