International Day for the Eradication of Poverty 2017

Theme: “Answering the Call of October 17 to end poverty: A path toward peaceful and inclusive societies”

The Call to Action of October 17 that was launched thirty years ago is recorded in the text on the Commemorative Stone at the Trocadero Human Rights Plaza in Paris which was unveiled in the presence of 100,000 people:

On the 17th of October 1987, defenders of human and civil rights from every continent gathered on this plaza. They paid homage to the victims of hunger, ignorance and violence. They affirmed their conviction that human misery is not inevitable. They pledged their solidarity with all people who, throughout the world, strive to eradicate extreme poverty. “Wherever men and women are condemned to live in extreme poverty, human rights are violated. To come together to ensure that these rights be respected is our solemn duty.”
Father Joseph Wresinski

The theme for this year’s commemoration reminds us of the importance of the values of dignity, solidarity and voice underscored in the Call to Action to fight to end poverty everywhere. These values are also evident in the United Nations’ Agenda 2030 for Sustainable Development which sets poverty eradication as the overarching objective and obligated all countries to end poverty in all forms, through strategies that guarantee the fulfillment of all human rights and ensure no one is left behind. The importance of public awareness, voice and the active participation of people living in extreme poverty is recognized both in the Agenda itself and in the process of consultations led by the United Nations that ensured the concerns and priorities of millions of people, especially those living in extreme poverty, were included and heard. The active participation of those living in extreme poverty will be critical to the success of the Sustainable Development Goals.

This year’s event is organized in partnership with the International Movement ATD Fourth World, the NGO Committee for Social Development and the United Nations Department of Economic and Social Affairs, supported by the Missions of France and Burkina Faso to the United Nations.

In addition to the Commemoration in New York, celebrations of this International Day are being organized worldwide. Through resolution A/RES/47/196 adopted on 22 December 1992, the General Assembly invited all States to devote the Day to presenting and promoting concrete activities with regard to the eradication of poverty and destitution.

Video of the Day: 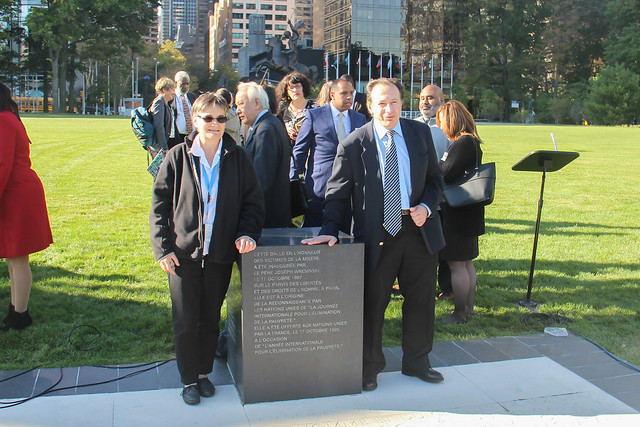 Click here to see the photos of the Day.

Together, it becomes possible to build a world where we live in peace, free from poverty and fear, and where every human being can achieve his or her full potential. Tools to help you get involved in the #StopPoverty campaign.