Meeting of Principals of ECESA Plus
17 November, New York

Principals of the Executive Committee on Economic and Social Affairs Plus (ECESA Plus) met at United Nations Headquarters in New York on 17 November 2015 to discuss how to support the follow-up to the 2030 Agenda for Sustainable Development.

Principals acknowledged that the implementation of the 2030 Agenda would require an unprecedented level of coordination among Member States, across the United Nations system and beyond.

The ECESA Plus mechanism includes over 40 organizations and was established in mid-2010 to bring relevant United Nations system agencies, the World Bank, IMF and the Rio Convention secretariats together with the Members of ECESA to facilitate greater complementarity and coherence.

Under-Secretary-General for Economic and Social Affairs, Mr. Wu Hongbo chaired this meeting as Convener of ECESA Plus. 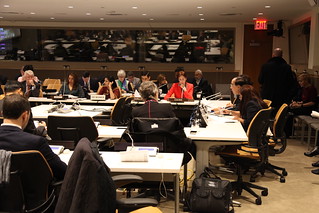