World leaders, BTS, join Guterres in call to get SDGs back on track

The world “is challenged like never before”, the UN Secretary-General António Guterres said on Monday, but the Sustainable Development Goals (SDGs) still offer a roadmap to get back on track.

“It would be easy to lose hope. But we are not hopeless. Or helpless. We have a path to recovery. If we choose to take it,” he said.

Mr. Guterres was speaking at the SDG Moment – a major event marking the start of the General Assembly High Level Week –  joined by more than 30 Heads of State, a debate led by top UN officials on COVID-19 and a performance by K-pop sensation BTS, headlined also by the President of the Republic of Korea.

For the UN chief, this SDG Moment is all about “coming together to save our planet and each other.”

Earlier this month, Mr. Guterres launched “Our Common Agenda”, a plan to strengthen and revitalize the whole multilateral system and rally the world around common objectives.

First, the world needs to end the pandemic. Noting the response “has been too slow and too unequal”, Mr. Guterres called on the world to mobilize behind a global vaccination plan that doubles production, to reach 70 per cent of the world’s population by the middle of next year.

Second, he highlighted the need for a sustainable and equitable recovery for all, so that the world stays on track to end poverty by 2030.

For him, that means bold investments in systems that support human development, but also “putting people above profits, including through progressive taxation, and ending tax evasion, money laundering, and illicit financial flows.”

He then pointed to equal rights for women and girls, saying none of the SDGs can be achieved without gender equality.

“We need bold investments to make sure every girl has a seat in the classroom and the skills she needs to chart her own future”, he said in the wake of the reopening of high schools in Afghanistan at the weekend, without the Taliban allowing girls to return to study.

“We need to dismantle the power structures that allow discrimination, violence and economic hardship to keep one half of humanity down. And we need to make sure that girls and women have a seat at every table,” he said.

Another priority is to end the war against the planet, by committing to net zero emissions by 2050. Mr. Guterres also asked Member States to shelve plans for any new coal-fired power plants after 2021, and mobilize $100 billion a year for climate action.

Lastly, he stressed the importance of an equitable global recovery, asking people everywhere to work with their governments to put people first in their budgets and recovery plans.

“My friends, the pathway is there. The choice is ours. Let’s move forward with hope and conviction,” he concluded.

Speaking at the event, the new president of the General Assembly, Abdulla Shahid, said that “going forward, the gaps in political will and resource commitment, remain a common fault line”, hampering progress towards reaching the SDGs.

“This must change. Let the setback that the world has seen, strengthen our resolve and reinforce our determination to recover from the pandemic and to build the SDGs. Together it is possible,” he said.

UN Photo/Cia Pak – Members of the BTS K-Pop group participate in the SDG Moment in the UN General Assembly hall.

Shot in the arm from BTS

One of the members of superstar band BTS, V, said that he had also “felt bewildered and troubled” by the setbacks of the past 18 months, but said now was “an ideal time of our lives to take on new challenges.”

“What is important are the choices we make when we are faced with change right? Some of you heard the news that we were coming to the UN and a lot of you were wondering whether we were vaccinated. And yes, all seven of us, of course, we received COVID-19 vaccination,” J Hope added.

BTS focused in how their generation felt lost last year during the peak of the COVID-19 pandemic when graduations and other important events were cancelled. But they sent a message of encouragement to all people around the world.

“I hope we just don’t consider the future as grim darkness. We have people concerned for the world and searching for answers. There are still many pages left in the story about us and I feel like we shouldn’t talk like the ending has already been written”, said Junkook.

They challenged the thought of their generation being “the covid lost generation” saying that it was “a stretch”.

“In these pictures, you can see there are kids that are trying to learn new things…They are not lost, they are finding new courage and taking on new challenges“, said Jin.

“Instead of the lost generation, a more appropriate name would be the ‘welcome’ generation because instead of fearing change, this generation says “welcome” and keeps pushing ahead”, explained Suga. 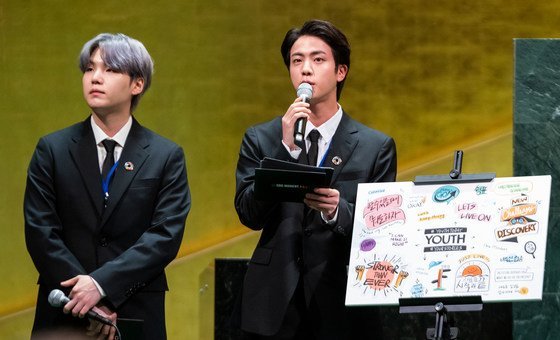 Members of the BTS K-Pop group participate in the SDG Moment in the UN General Assembly hall., by UN Photo/Cia Pak

The SDG event is designed to build the momentum needed to deliver on the Decade of Action and Keep the Promise of the SDGs.

Besides world leaders, leaders from business, civil society, local authorities, the SDG Advocates and the UN, highlighted the need to scale up solutions.

For the UN, to get the SDGs back on track and prevent the worst impacts of climate change, a profound shift in economies and societies everywhere, is now needed.

In the last 18 months, COVID-19 has disrupted economies and livelihoods, deepened inequalities and risks sending more than 70 million people into extreme poverty.

In the same period, progress on reducing greenhouse gas emissions has been too slow and biodiversity loss has continued at an extraordinary pace. This is compounded by a deeply uneven global response to the pandemic with the world’s poorest countries and people suffering the most.

Recognizing this urgency, the UN launched a new campaign last week, “Keeping the Promise”. The digital campaign calls on people around the world to make a promise to take action for a better future for all.

Users are being asked to choose from 11 promises inspired by the 17 Sustainable Development Goals, the world’s to-do list to protect the planet and all its people.